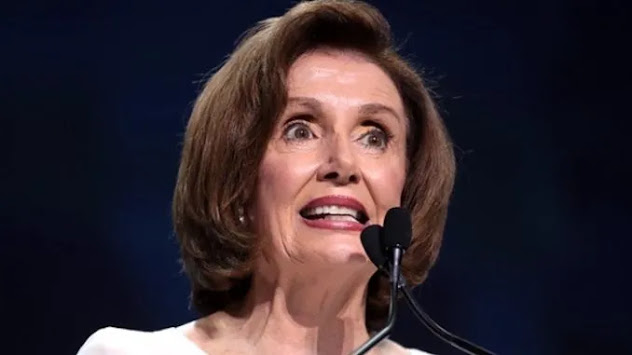 Republican House members have vowed to hold “insane” Nancy Pelosi (D-CA) to her own standards and test her mental health and fitness to serve.

Speaking on the Mark Levin Show on Thursday, McCarthy said House members are seeking a way to test House Speaker Pelosi’s fitness to serve after she said President Trump might be removed under the Constitution’s 25th amendment.

McCarthy said it is Pelosi’s mental well-being that is in question, given her idea to try to oust the president less than a month before the November election.

Pelosi announced at her weekly press conference on Thursday that she is seating a commission to study the president’s physical and mental ability to govern.

“I’m not talking about it today except to tell you, if you want to talk about that, we’ll see you tomorrow,” Pelosi said. “But you take me back to my point.”

“Mr. President, when was the last time you had a negative test before you tested positive? Why is the White House not telling the country that important fact about how this made a hot spot of the White House?” Pelosi said, referring to Trump’s contracting the coronavirus, which he overcame after being treated at Walter Reed National Military Medical Center.

Breitbart report: McCarthy said it is the Speaker’s mental well-being that is in question given her idea to try to oust the president less than a month before the general election.

“To even bring this up when you’re talking 27 days before an election,” McCarthy said. “You know she’s second in line right after the vice president.”

“It really brings into question her own mental capacity to be Speaker of the House,” McCarthy said, adding that Pelosi should be held to the same standard that she’s demanding Trump meet.

“Are you going to recommend the same commission take a look at her mental capacity?” Levin asked. “Does she have to submit any kind of records about her health? Mental health?”

“Shouldn’t she have to submit to the same test that she’s trying to claim?” McCarthy said, adding that he doesn’t think she would survive such scrutiny.

“I am getting together with a number of members — and can tell you there are people on the other side that have raised this question as well,” McCarthy said. “We’re going to get together; find out ways that we can craft something.”

McCarthy noted that it takes a two-thirds vote in both the House and the Senate to remove a president under the 25th Amendment.

“She knows this will not be a reality,” McCarthy said. “This is just another attempt to attack our democracy.”

Section four of the 25th amendment states: “Whenever the Vice President and a majority of either the principal officers of the executive departments or of such other body as Congress may by law provide, transmit to the President pro tempore of the Senate and the Speaker of the House of Representatives their written declaration that the President is unable to discharge the powers and duties of his office, the Vice President shall immediately assume the powers and duties of the office as Acting President.”