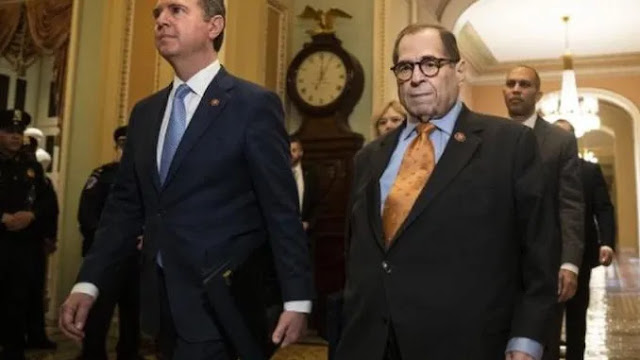 During an appearance on MSNBC Wednesday, Nadler was asked by host Ari Melber about his thoughts on the release Paul Manafort from prison.

“Well, it’s highly suspicious. It seems to be another step in the politicization of the Justice Department with the president’s friends,” Rep. Nadler said.

“People the president supports are treated one way, and everybody else is treated the other way.”

“The outrageous decision to drop the prosecution of Michael Flynn after he stood up in court and swore under oath that he was, in fact, guilty.”

“This is unprecedented, and we have a real problem with the Justice Department being subverted and politicized to be the personal agent of the president instead of the Department of Justice of the United States.”

Breitbart.com reports: On Bill Barr, Nadler said, “He had agreed to come in and testify before the committee on March 31, as you pointed out, and that was put off. We’ve been in communication with them. And now that the District of Columbia has expanded the stay-at-home order until June 8, we expect to see Barr in front of our committee on June 9, the very next day.”

He continued, “Well, he hasn’t agreed to it yet, but we will do what we have to do, whether that’s a subpoena or that’s deciding the Department of Justice doesn’t really need all the appropriations it’s getting, whether the Attorney General doesn’t need its appropriations. We cannot have a situation where the attorney general just thumbs his nose.”

When asked about the Justice Department and the Bureau of Prisons rewarding people who were loyal to Trump, Nadler said, “Clearly, that is clearly the case. And you see this in exactly what you pointed out, Manafort, on the one hand, Cohen, on the other hand, Flynn, the attempt to reduce the sentence of Roger Stone. Step after step after step to make the Justice Department not a Department of Justice of the United States, but simply a handmaiden of the president. And the president says so. The president comes out and says we’re going to look at the crimes committed by the investigators. We’re going to investigate other things. That’s why we have to have Barr in front of us on the 9th to get to the bottom, that they are subverting the Department of Justice into a personal agent of the president and subverting justice. And that’s completely contrary to the interests of justice in the United States. We cannot have a Department of Justice that is not impartial and that serves the personal interests of the president and not the interests of justice.”

Melber asked, “Will you seek to hear from any of these prosecutors as well?”

Nadler said, “We’re in discussion with a number of individuals, and that may very well happen.”

He added, “The president’s emotional responses cannot justify illegal or unconstitutional acts, obviously, if we are a nation of laws. And here you have a perfect illustration. The president, on the other hand, and Attorney General Barr, on the one hand, are making sure that the president’s friends, Roger Stone tries to get a lighter sentence, Flynn doesn’t get prosecuted even though he pleaded guilty on the one hand. But anyone who is honest like Atkinson, the inspector general who simply did his job mandated by law, he is punished. He is fired.”