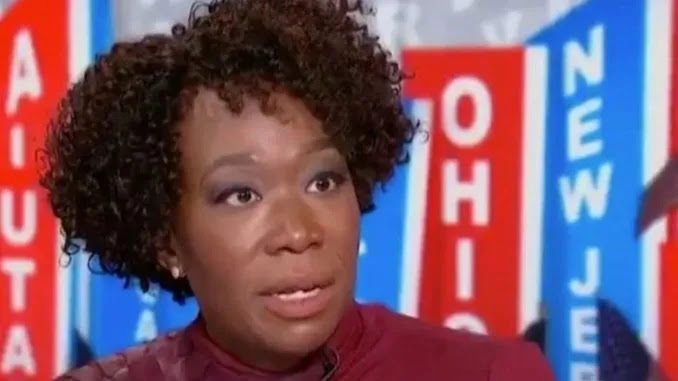 On Wednesday, Reid told co-host Rachel Maddow that “a great amount of racism, anti-blackness, anti-wokeness” has been exposed by President Trump’s success.

Reid and Maddow discussed the closeness of the race and how the potential for a “red wave” bothered them so much because they spent five years propagating the baseless Russian collusion claim.

Yet, despite their tireless efforts, millions of Americans ignored them and voted for Trump.

“I think even though we intellectually understand what America is at its base, right?” Reid said.

“That there is a great amount of racism, anti-blackness, anti-wokeness, this idea that political correctness is some sort of scheme to destroy white America, right?”

“Like, we know what this country is, but still part of you — I think part of your heart says, ‘You know what, maybe the country’s going to pay off all of this pain,’” Reid added.

“As the night went on, and I realized, and it sunk in, OK that’s not happening.“

“We are still who we thought, unfortunately,” Reid said.

As highlighted in The Hill, Reid claimed on Wednesday that the amount of racism in America is staggering, and the fact that the presidential election is so close is both “aggravating” and “disappointing.”

“I think partly because we knew the red wave was a thing, the red mirage, I should say, we all knew it was coming,” Reid told Maddow.

“In the moment, it’s aggravating. And I think partly, and I said this last night, I do think it’s because we’ve been reporting for five years, Rachel, about Russia … undermining our national security, the impeachment, the racism, the Nazis, all of it and then COVID laying on top of it, [it] felt like a repudiation was coming.”

“If somehow they manage to stumble into the Supreme Court, do any of you guys expect Uncle Clarence and Amy Coney Barrett and those guys to actually follow the letter of the law?” Reid asked her followers. “No. It’s a completely politicized Supreme Court that you can’t just trust they’ll do the right thing. … Now, so far, the courts have actually been pretty good. So we’ll see.”

Needless to say, Reid’s remarks didn’t go over well, and many of her fellow Twitter users called her out for what they said was blatant racism.