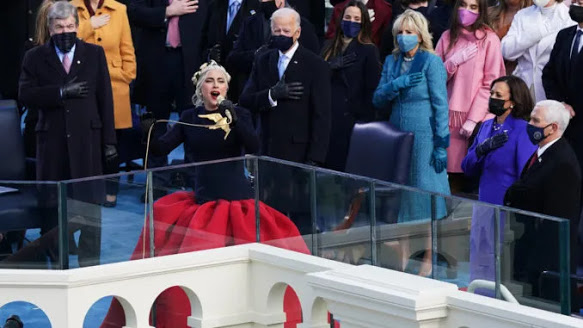 (Paranormal) Joe Biden’s inauguration ceremony has been compared to ‘The Hunger Games,’ as many found strange parallels to the dystopian sci-fi movie, whose themes include anything BUT “unity” which the new president spoke of yesterday.

Celebrating “America’s day… democracy’s day”, Lady Gaga took to the steps of the Capitol on Wednesday with a performance of the national anthem before Biden and Vice President Kamala Harris were sworn into office.

Viewers however, appeared captivated by Lady Gaga’s outfit, most notably her oversized broach which has been likened to the ‘Mockingjay’ symbol from the Hunger Games.

The symbol – which is included in the movie – is that of a fictitious rebellion against the despotic ‘Capitol.’

So… is Lady Gaga’s wearing of the ‘mockingjay’, symbolizing the beginning of our own Hunger Games?

In the books, the Games are basically a punishment for the districts after they once attacked the Capitol. This sounds strangley familiar to what happened two weeks ago in America – an attack on the Capitol.

RT reports: The uncanny resemblance was not lost on the film’s official Twitter handle, which joked “we’re missing one of our mockingjay pins, has anybody seen it?”

we’re missing one of our mockingjay pins, has anybody seen it?

Though the singer earlier clarified that the pin is, in fact, a “dove carrying an olive branch,” that did little to stem the comparisons to the film – in which the ruling Capitol forces youths to fight to the death each year in a bloody battle royale, a punishment for a failed revolution by the movie’s 12 oppressed ‘districts.’

The odds are not in your favor pic.twitter.com/yYIANpGNVs

“The districts are the body. The Capitol is the beating heart. Your hard work feeds us, and in return we feed and protect you. But if you resist the system and starve yourselves, it is you who will bleed,” Snow says in the third installment of the film series as a warning against rebellion – also referred to as the “dark days” in the movie, perhaps not far off from Biden’s prediction of a “dark winter” amid the Covid-19 pandemic.