Midnight Mary: The Story Of A Woman Buried Alive 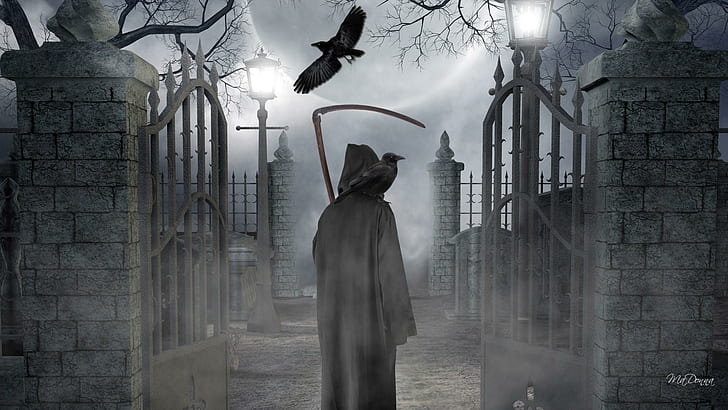 From what scant historical accounts there are, Mary Hart led an unremarkable life. It was, however, her alleged unusual death — and what happened afterward — that has made her story memorable.

First off, let’s start with what is known to be fact: That in 1872, a woman by the name of Mary Hart died in New Haven and was thereafter interred in Evergreen Cemetery.

AT HIGH NOON
JUST FROM, AND ABOUT TO RENEW
HER DAILY WORK, IN HER FULL STRENGTH OF
BODY AND MIND
MARY E. HART
HAVING FALLEN PROSTRATE:
REMAINED UNCONSCIOUS, UNTIL SHE DIED AT MIDNIGHT,
OCTOBER 15, 1872
BORN DECEMBER 16, 1824

Oh, and then across the top, it says: THE PEOPLE SHALL BE TROUBLED AT MIDNIGHT AND PASS AWAY. 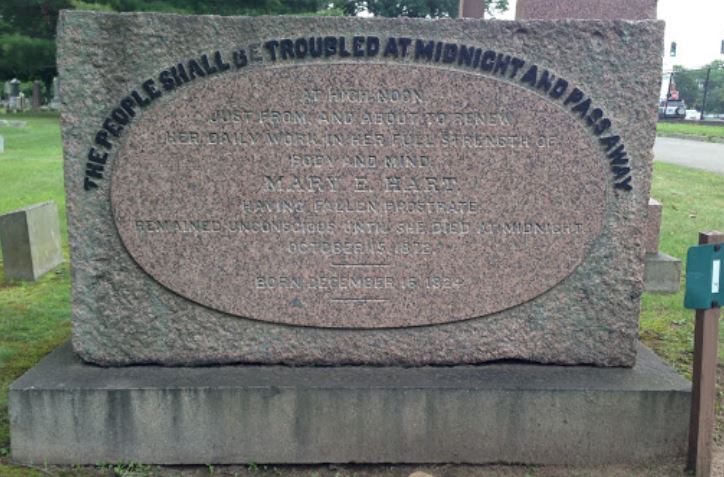 Cheery sentiment, right? As our friend Donald Carter points out in his Connecticut’s Seaside Ghosts:

The quote itself is not some ancient curse or the last words of some poor soul convicted of witchcraft (of which Connecticut had more than its share!). It is an abridged Biblical passage from Job, chapter 34, verse 20.

The complete passage, in the King James original version goes, “In a moment shall they die, and the people shall be troubled at midnight, and pass away: and the mighty shall be taken away without hand.” The passage makes sense when one reads the rest of the marker.

According to David Phillips’ Legendary Connecticut (and others), there are a three different stories surrounding the demise of Ms. Hart.

The first — and most horrific — says her family found her apparently dead of a stroke at the stroke of midnight and quickly had her buried; her aunt, however, had a dream the next night in which she saw Mary still alive in her coffin and plead with the powers-that-be to dig her up.

After they finally capitulated, dug her up and opened her casket, they discovered a horrific sight: Mary was dead, but apparently hadn’t been quite that way when buried — her fingernails were bloodied and the inside of her coffin was shredded as she had apparently tried to claw her way out.

Like the Man in Black from The Princess Bride, she had only been mostly dead . . . for a while, anyway. Burying six feet under and leaving her to rot eventually made her all dead.

The next legend surrounding Mary is that following her possibly nasty demise, her restless spirit would wander the area around her former home on Winthrop Avenue (adjacent to Evergreen Cemetery), occasionally taking rides with unsuspecting good samaritans.

A variation on the old “disappearing hitchhiker” tale, a woman fitting Mary’s description would bum a ride late at night and when the driver would return the next day to see if she got home alright, they would discover that the person they aided was in fact the spirit of the departed Mary.

The final story is also from the urban legend files, basically going along the lines of Mary having been a witch in life and her grave being cursed — anyone who was there at midnight would meet a terrible end when the witch rose from the dead.

Since New Haven is renowned as a college town, there was always a student or two who scoffed at the story and tried to stay the night in the cemetery, only to be found dead the next morning, a victim of the murderous spirit of Midnight Mary.

Janitza Matos, who lives across the street from the cemetery and attended a recent lantern tour, recounted a story of one night when she walked through the graveyard with her cousin.

She swore she heard her cousin calling her further into the cemetery but realized something seemed off. As Matos walked toward the gate, she saw her cousin from the other side, wondering where she had been.

She said it has gotten to the point where she doesn’t want to go to the cemetery. Weird things tend to happen at night in her neighborhood, she said, which leads her to wonder whether it’s someone or “something” else.

The good people of New Haven have always been happy to continue sharing the supernatural stories of Midnight Mary, the woman whose legacy features a cursed gravestone and a tale of woe — a damned damsel, to be sure.

Hart’s gravestone is at the back of the cemetery, on the path that parallels the iron fence that separates the graveyard from Winthrop Avenue, with many people coming to visit, leaving coins and wondering whether the myths are true.