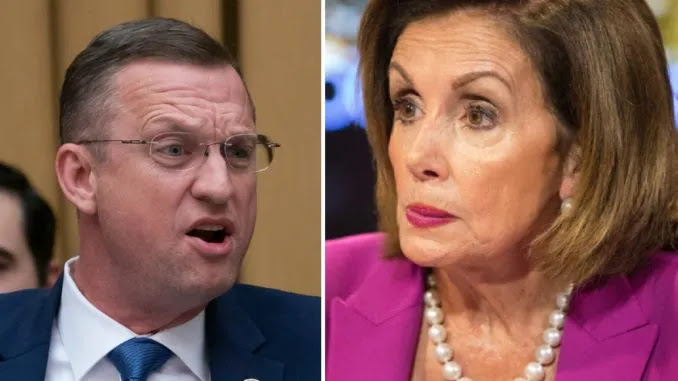 Rep. Doug Collins (R-GA) has introduced a resolution to push for the removal of Rep. Nancy Pelosi (D-CA), claiming the House Speaker’s recent actions prove she “does not have the mental fitness” to continue leading the House of Representatives.

“Speaker Nancy Pelosi’s unwillingness to abide by the Constitution, combined with her recent actions, call into question her own mental fitness, which is why it’s critical that the House of Representatives demand her removal from the line of succession,” Collins said in a statement to Fox News.

A draft of Collins’ resolution argues that Pelosi “is unable to adequately serve as Speaker of the House of Representatives and should therefore be removed from her position.”

The resolution states that Pelosi “has spent the majority of the House of Representative’s time pursuing baseless and fruitless investigations” against President Donald Trump and his administration, including launching an impeachment inquiry into him in 2019.

It's clear that Nancy Pelosi does not have the mental fitness to serve as Speaker of the House of Representatives.

I'm introducing a resolution to push for her removal.

The resolution continues: “On October 31, 2019, Speaker Nancy Pelosi oversaw the first party-line vote to begin an impeachment inquiry into a president in the history of our country.”

Fox report: The House of Representatives, in December, voted to adopt two articles of impeachment against the president: abuse of power and obstruction of Congress.

At the center of the inquiry was Trump’s efforts to press Ukraine to launch politically related investigations — regarding former Vice President Joe Biden and his son Hunter’s dealings in Ukraine, as well as issues related to the 2016 presidential election.

The president’s request came after millions of dollars in U.S. military aid to Ukraine had been frozen, which Democrats argue shows a “quid pro quo” arrangement. Trump has denied any wrongdoing.

The president was acquitted on both articles of impeachment by the Senate in February.

But Collins’ resolution also states that Pelosi “ripped up the State of the Union speech” delivered by the president in February “before the American people,” referencing when Pelosi tore her printed copy of the speech immediately after Trump wrapped his remarks at the 2020 State of the Union.

“Over her tenure of her speakership, Speaker Nancy Pelosi has started to demonstrate a decline in mental fitness, calling into question her ability to adequately serve the House of Representatives and the American people,” the resolution states. Collins’ resolution referenced an interview on ABC News, saying Pelosi “appeared confused and exhibited bizarre behavior” by “blurting out randomly ‘Good Morning, Sunday morning.’”

A spokesman for Pelosi did not immediately respond to Fox News’ request for comment on the Collins resolution.

Collins’ resolution comes after Pelosi, last week, announced legislation to create a commission that would allow Congress to oust a president from office, using the 25th Amendment, just a day after she accused President Trump of being “in an altered state” from his coronavirus treatment.

“This is not about President Trump,” Pelosi said Friday. “He will face the judgment of the voters. But he shows the need for us to create a process for future presidents.”

Pelosi denied that the timing of the legislation had anything to do with the election and argued that setting up a commission on presidential capacity is needed to “give some comfort to people” on the stability of the government.

Under the 25th Amendment, Congress, the cabinet and vice president can strip powers from a president if for some reason he or she is declared unfit under dire circumstances. But that requires a 2/3 vote of both houses.

Section 4 of the 25th Amendment also states that a majority of “such other body as Congress may by law” determine if the president cannot discharge the powers and duties of his office. The 25th Amendment was ratified in 1967, and Rep. Jamie Raksin, D-Md., who appeared with Pelosi last week, said it’s time for Congress to set up this body.

Raskin’s bill, which would have to be passed by both chambers of Congress and signed by the president, would set up “the Commission on Presidential Capacity to Discharge the Powers and Duties of the Office.”

The 17 members of the bipartisan commission would work with the vice president to determine whether the president is “unable to discharge the powers and duties of his office” due to physical or mental incapacity. Prospectively, that commission would adjudicate the need for a transfer of power.

While such a bill may pass the Democrat-controlled House, it would seem extremely unlikely to pass the Republican-held Senate unless there was a significant development in Trump’s health. However, it introduces a new political narrative just weeks before Election Day.

Pelosi was asked Friday if she thought Trump has met the threshold for the 25th Amendment to be invoked.

“That’s not for us to decide,” she said.