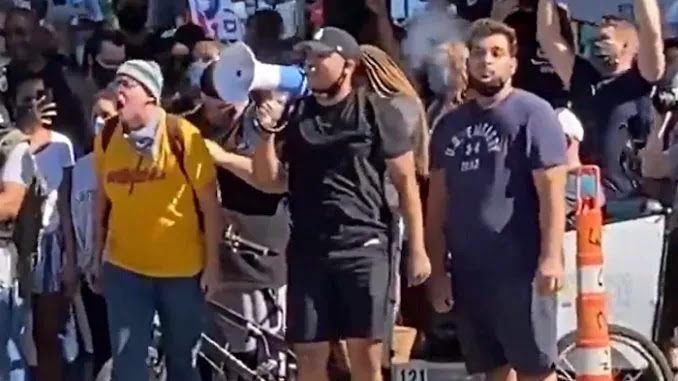 A group of Joe Biden supporters yelled obscenities at President Trump supporters as they sang the National Anthem on Saturday in Austin, Texas.

Video footage shows the Biden supporters standing on one side of the street with one man yelling “Fuck fascist USA!” while another person screams “Fuck Trump!”:

Breitbart.com reports: Moments later, the camera panned around to show a crowd of Trump supporters carrying American flags and Trump 2020 flags in front of the Texas Capitol as they sang the Star-Spangled Banner.

One person held a sign that read “Ballot Laws Matter.”

Although several media outlets declared Biden the winner of the presidential election on Saturday, President Trump’s allies doubled down, saying the media “do not get to determine who the president is,” according to Breitbart News.

“No matter what the media tells you, this is NOT over. It’s not over until every LEGAL vote is counted. This is America. We the PEOPLE decide who our next President is. NOT the media,” said Rep. Doug Collins (R-GA).

Rep. Steve Scalise (R-LA) echoed his comments, adding, “There are still serious legal challenges that have been made, and until that process is resolved, the election is not final.”

In a statement to corporate media on Saturday, President Trump said, “The American People are entitled to an honest election: that means counting all legal ballots, and not counting any illegal ballots.”

“This is the only way to ensure the public has full confidence in our election,” he explained.

Trump continues to close the gap in Arizona, as Biden’s lead has dropped well below 30,000, Breitbart News reported Saturday:

As of Friday night, Biden’s lead in Arizona shrunk to 29,861 as Trump consistently closes the gap while the state continues to tally outstanding ballots. On Friday night, Arizona Secretary of State Katie Hobbs (D) said 173,000 ballots remained outstanding, in addition to 47,000 provisional ballots which officials will not tally until next week.

In his statement, the president said “I will not rest until the American People have the honest vote count they deserve and that Democracy demands.”