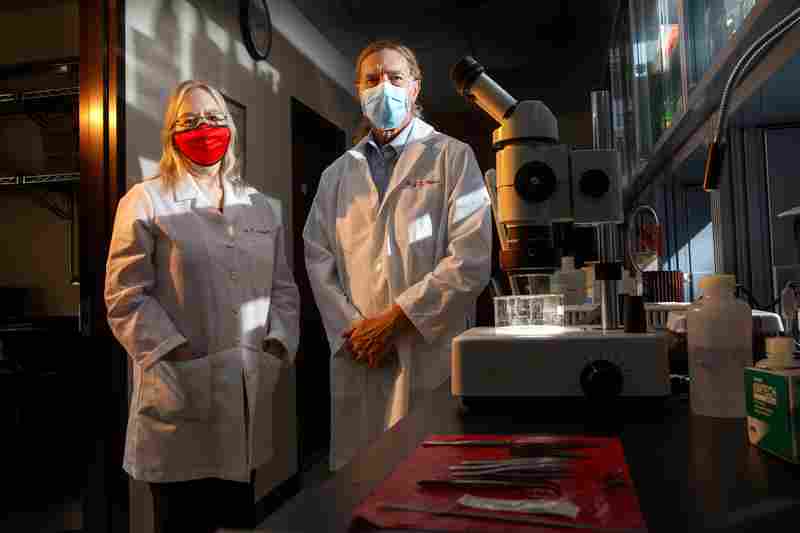 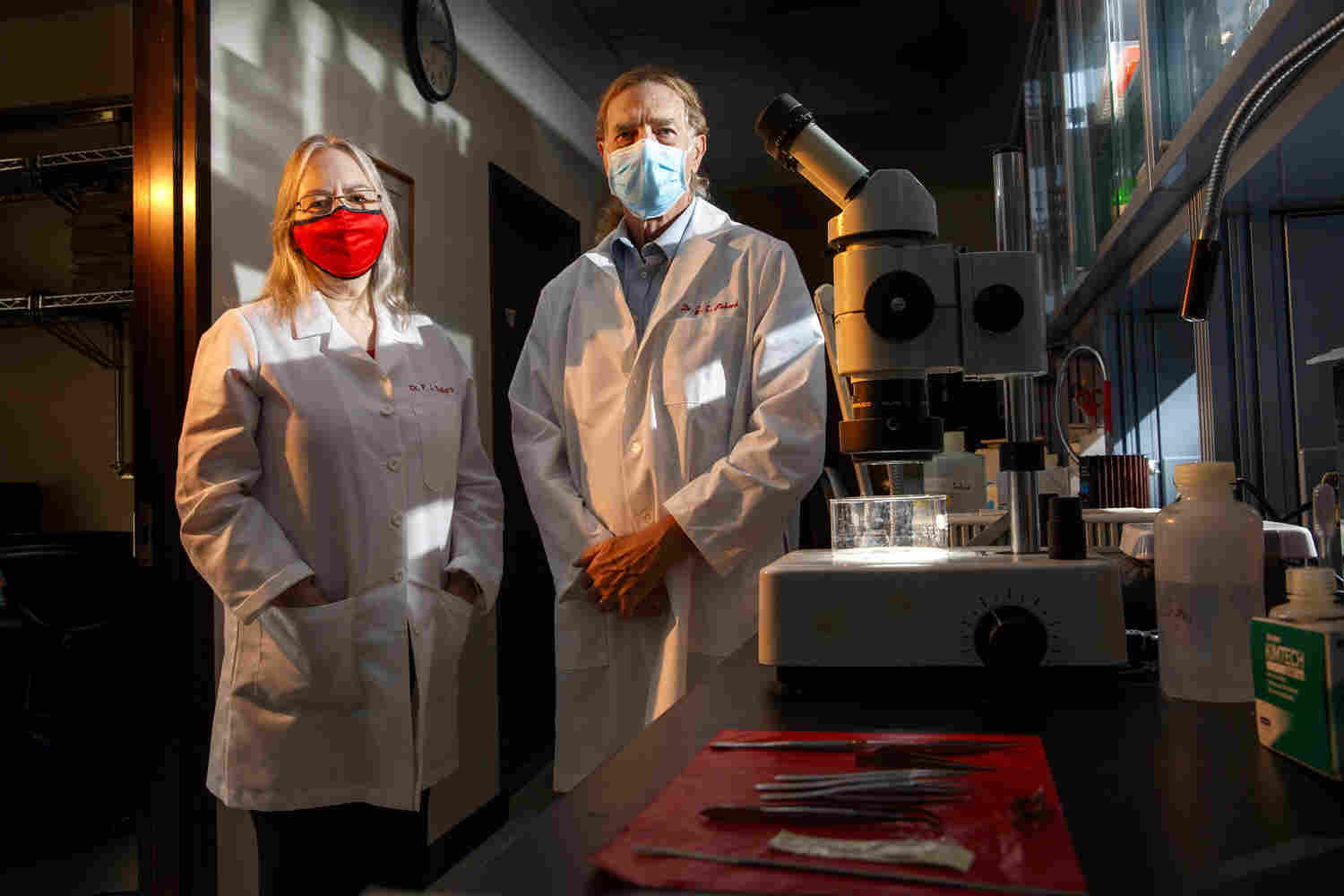 A genetically edited form of a herpes simplex virus—rewired to keep it from taking refuge in the nervous system and eluding an immune response—has outperformed a leading vaccine candidate in a new study from the University of Cincinnati, Northwestern University and the University of Nebraska-Lincoln.

Published Nov. 6 in the journal Nature Vaccines, the study found that vaccinating guinea pigs with the modified live virus significantly increased the production of virus-combating antibodies. When challenged with a virulent strain of herpes simplex virus, the vaccinated animals displayed fewer genital lesions, less viral replication and less of the viral shedding that most readily spreads infection to others.

The modified virus is actually a form of herpes simplex virus type 1, best known for causing cold sores around the lip. The fact that it demonstrated cross-protection against HSV type 2—the sexually transmitted type usually responsible for genital herpes—suggests that an HSV-2-specific edition of the vaccine could prove even more effective, the researchers said.

The World Health Organization estimates that more than 500 million people have HSV-2, which persists for a lifetime and often flares up in response to stress. In addition to causing blisters, HSV-2 increases the risk for HIV infection and may contribute to Alzheimer's disease or other forms of dementia.

Despite the prevalence of the viruses, more than four decades of research have yet to yield an approved vaccine for HSV-1 or HSV-2. Part of the difficulty: The alphaherpesviruses, which include HSV, have evolved an especially sophisticated way of evading the immune responses aimed at destroying them.

After infecting mucosal tissues of the mouth or genitourinary tract, HSV works its way to the tips of sensory nerves that transmit signals responsible for the sensations of pain, touch and the like. With the help of a specialized molecular switch, the virus then breaks into the nerve cell, hitching a ride on the molecular equivalent of a trolley car that transports it along a nerve fiber and into the nucleus of a sensory neuron. Whereas the mucosal infection is soon cleared by the immune response, the infected neurons become a sanctuary from the body's immune system, with HSV leaving only when stirred by rises in steroids or other stress-elevated hormones in the host.

Nebraska's Gary Pickard and Patricia Sollars, alongside Northwestern's Gregory Smith and Tufts University's Ekaterina Heldwein, have spent years studying how to prevent HSV from reaching the safety of the nervous system. Heldwein advanced those efforts when she characterized the architecture of a certain alphaherpesvirus protein, pUL37, that the team suspected was integral to the virus moving along nerve fibers. Computer analyses based on that architecture suggested that three regions of the protein might prove important to the process.

Smith then carefully plucked out and replaced five codons, the fundamental coding information in the DNA, from the viral genome of each region. The researchers hoped that those mutations might help impede the virus from invading the nervous system.

Their hopes were rewarded when Pickard and Sollars injected mice with a virus modified in region 2, or R2, of the protein. Rather than advancing deeper into the nervous system, the virus was stuck at the nerve terminal. But the team also knew that modifying HSV could have unintended consequences.

"You can keep the virus from getting into the nervous system," said Pickard, professor of veterinary medicine and biomedical sciences at Nebraska. "That's not that hard to do by making broadly debilitating mutations. But when you knock down the virus so much that it doesn't replicate well, you are not rewarded with a robust immune response that can protect you from future exposures."

So the researchers were heartened when further studies showed that the R2-mutated virus performed well as a vaccine in mice. Moreover, it circumvented certain stubborn issues that have cropped up with other vaccine approaches. Some approaches have involved challenging the immune system with only a subset of HSV components, or antigens, priming the body to recognize them but potentially miss others. Some have modified the virus so that it can replicate just once, preventing long-term persistence in the nervous system but also reducing spread in mucosal tissues and, by extension, a stout immune response.

"So it's the same story over and over again: Either your subunit vaccine doesn't present enough antigens, or you make the live virus essentially so sick that it doesn't work really well to generate an immune response," Pickard said. "That's why we're so optimistic about our R2 platform, because it avoids all those problems."

David Bernstein, a researcher at Cincinnati Children's Hospital Medical Center who evaluates herpesvirus vaccine candidates through a program supported by the National Institutes of Health, took note of the team's success and reached out to Northwestern's Smith in 2018. Armed with an R2-modified form of HSV-1, Bernstein decided to test its effectiveness against HSV-2 infection in guinea pigs. As promising as their prior results had been, Pickard conceded that he wasn't sure an HSV-1 vaccine would be up to the task of generating immunity against HSV-2.

But just one of the dozen R2-inoculated guinea pigs developed acute lesions after being injected with HSV-2, compared with five of 12 animals receiving another promising vaccine candidate that recently failed a human clinical trial. Whereas that latter vaccine candidate had no discernible effect on the number of days that guinea pigs shed the virus, the team's R2 vaccine cut the shedding period from 29 days to about 13. And unlike the guinea pigs receiving no vaccine or the other candidate, those receiving the R2 vaccine showed no sign of HSV-2 in the cluster of brain cells that normally house it. Neutralizing antibodies, meanwhile, registered about three times higher in the R2-inoculated guinea pigs than in those inoculated with the other vaccine candidate.

"The fact that the viral shedding was knocked down so much with the R2 vaccine is really important, because it's the viral shedding—even if it doesn't cause lesions—that can then pass on the virus," Pickard said. "If you have genital herpes, you can pass that on to your significant other, not knowing that you're doing it. It's very problematic. So the fact that the shedding was knocked down so much is a really good sign."

With an HSV-1 version of the R2 vaccine showing such promising cross-protection against its sexually transmitted counterpart, the researchers' to-do list now includes making and testing an HSV-2 vaccine against the HSV-2 virus.

"If you're making antibodies against the proteins of that particular virus, it stands to reason (that) it would work better than if you're making an antibody against something that's slightly different," he said. "So that's our expectation."

'It's going to have a big impact'

Around the time that Bernstein and his NIH program were expressing interest in the R2 vaccine design, Pickard and Smith were launching a startup, Thyreos LLC, aimed at further developing and eventually licensing their R2 vaccine design.

Fittingly for a couple of researchers based in Nebraska and Illinois, the duo is working on vaccines for livestock—cattle and hogs, specifically—that contend with alphaherpesviruses of their own. In cattle, the bovine herpesvirus can cause respiratory disease, curb appetite and even contribute to aborted calves, all of which add up to billions of dollars in lost revenue annually. Though a modified live-virus vaccine for cattle does exist, it also gets into the bovine nervous system. And that, Pickard said, can spell trouble in cattle just as easily as in people.

"What happens, then, is that when those cows are loaded on a truck and shipped to a feedlot, it's a stressful environment," he said. "The virus hiding in the immune system reactivates. They start shedding the virus from excretions in their nose, and they can then pass that virus on to other animals in that feedlot, and the cattle can get respiratory disease.

"So the fact that our R2-modified viruses don't enter the nervous system is not just an academic thing. Actually, it has a real, practical application for the cattle industry."

As they prepare to embark on a new series of studies that they hope will show the R2 design's superiority to the current industrywide vaccine, Pickard and Smith are also kicking off an initial round of seed funding for the enterprise.

Given that the team initially developed its R2 design in the alphaherpesvirus that infects pigs—the so-called pseudorabies virus—Pickard also expressed confidence in the design's promise for protecting hogs. In the late 1990s and early 2000s, the United States waged a successful campaign to eradicate pseudorabies from the country, in large part through vaccination. As with cattle, though, the vaccine can enter the nervous system of hogs and has proven less successful in countries that are less vigilant about outbreaks.

"Again, we are pretty confident that our pseudorabies virus R2 vaccine is going to be more effective than what's been out there," Pickard said. "In terms of protecting pigs, it's going to have a big impact at some point.

"These pathogens can survive trans-Pacific transport in feed ingredients or feed products. When you talk to people who are concerned about biosecurity, they say that whatever is going on elsewhere in the world in terms of these viruses, eventually, they may show up here. It's just a matter of time."

21.01.2021 laikas 21:00 America up in flames like Democrat-run cities across America is the left’s goal for Joe Biden’s presidency
Informed people know that the far left has desires, designs, and determination to overthrow America because we have been a beacon of freedom for hundreds of years. They want that light extinguished forever.