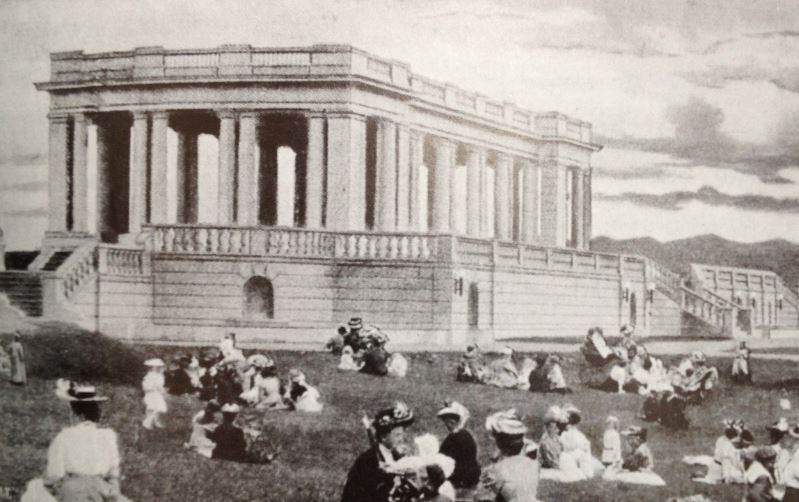 This innocent looking city park is built on top of a graveyard. The Mount Prospect graveyard, which came to be known as Boot Hill, was created in 1858. The cemetery opened in 1858 and the first burial occurred the following year.

In 1872, the U.S. Government determined that the property upon which the cemetery sat was actually federal land, having been deeded to the government in an 1860 by a treaty with the Arapaho.

The government then offered the land to the City of Denver who purchased it for $200. Although today it is still mostly remembered as Mt. Prospect Cemetery, in 1873 the cemetery’s name was changed to the Denver City Cemetery.

The city hired an undertaker to dig up the 6,000 to 10,000 remaining bodies, put them in 1-foot by 3½-foot pine boxes, and deliver them for burial at Riverside Cemetery. It was a horrifying sight. Workers broke corpses into pieces to get them to fit into the mini-caskets.

Body parts littered the ground and got mixed together in the process. Many of the graves were looted by the men digging them up. During the work, psychics warned workers the dead would return unless a short prayer was uttered for each casket, but no one listened to them.

Several years went by while the city waited for citizens to remove the remains of their families, but few did. Most of the people buried in the cemetery were vagrants, criminals, and paupers, which probably had a lot do to with why the majority of bodies, more than 5,000, remained unclaimed.

In 1893 The City of Denver then awarded a contract to undertaker E.P. McGovern to remove the remains. McGovern was to provide a “fresh” coffin for each body and then transfer it to the Riverside Cemetery at a cost of $1.90 each.

The macabre work began on March 14, 1893, while an assorted audience of curiosity-seekers and reporters came and went. For the first few days, the transfer was orderly. However, the unscrupulous McGovern soon found a way to make an even larger profit on the contract.

Ratherthan utilizing full-size coffins for adults, he used child-sized caskets that were just one foot by 3½ feet long. One source claims this was done at least partially because of a coffin shortage caused by a mining accident in Utah.

Packing the bodies up, McGovern sometimes used as many as three bodies for just one casket. In their haste, body parts and bones were literally strewn everywhere in disorganized mess. Their haste also allowed souvenir hunters and onlookers to help themselves to items from the caskets.

One worker, removing valuable brass from the coffins, ran hysterically from the graveyard saying a ghost jumped on his back. People in neighboring houses reported confused spirits wandering through their homes or appearing in mirrors.

A huge scandal erupted, and Mayor Platt Rogers ordered all work halted, while an investigation was conducted. No one was able to sort out the mess the workers left behind.

The remaining bodies were plowed under, and grass and trees planted. Today, sensitives detect an undertone of sadness and confusion at the site, and some say they can hear a low moaning sound coming from the restless ground.

Writer and playwright Russell Hunter said in a 1980 interview said he based many elements from The Changeling on experiences from his first months in Denver in 1968, while living in a large house at 1739 East 13th Avenue on the northern edge of Cheesman Park. The house was razed in the 1970s and a condominium building now stands on the site. The house the film centers on is called the Chessman House, a nod to the park’s name.

Here is what one visitor to this park writes:

“Went here when I first moved to Denver. I walked through the most intense cold spot I have ever felt in my life and it was unexplainable. I googled the park as soon as I got home and discovered it is popularly receded to as “haunted”. So I took a voice recorder back out one night and walked around. Didn’t hear anything and didn’t listen to the playback for several months.

“When I did I could hear music around the gazebo. Only way to describe the music is “old-timey”. Faint but distinct. I’m completely convinced. I’ve never had experiences like that anywhere else.”

And there are a lot of such stories. The location of the park is Roughly bounded by E. Thirteenth Ave., High St., E. Eighth Ave., and Franklin St., Denver, Colorado. Would you like to go there?