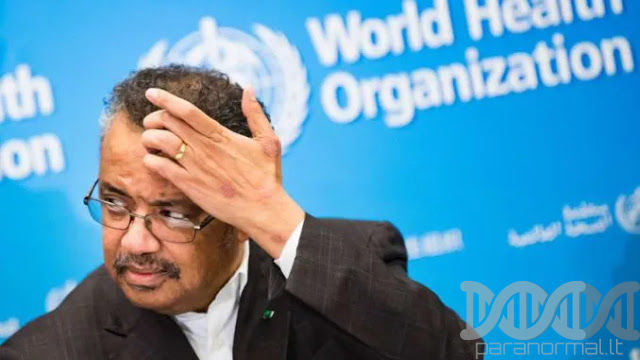 The WHO announced earlier today that trials for the malaria drug had been suspended following fears over the drug’s safety.

The news comes despite some, including a handful of world leaders championing the use of hydroxychloroquine in combating coronavirus.

It appears the public health body has just revealed that it is influenced by external forces like the pharmaceutical industry.

According to NEO, the current WHO Scientific Advisory Group of Experts (SAGE) is full of members who receive “financially significant” funds from either major vaccine makers, or the Bill and Melinda Gates Foundation (BGMF) or Wellcome Trust.

The Express reports: Last week, a study in the medical journal, The Lancet, said there were no benefits in treating coronavirus patients with hydroxychloroquine and that it may in fact be dangerous.

The WHO often takes advice and bases its policy direction on such studies.

The health body relies on science and industry to determine its own advice, as many of its leaders aren’t scientists or doctors, but in fact politicians.

The WHO’s judgement has, as a result, come under question, with some suggesting its leaders are not well placed to give advice they may not necessarily wholly understand.

Such a topic was explored during filmmaker Lilian Franck’s 2018 documentary, “TrustWHO”, which explored the often shady machinations of the organisation.

Dr Wodarg had closely monitored the Swine Flu pandemic of 2009.

His investigations into the WHO’s handling of the pandemic led him to launch an inquiry into the Swine Flu pandemic and the WHO’s dealings with the pharmaceutical industry in the lead up to the N1H1 pandemic.

At a council meeting, Dr Wodarg declared that “all the business deals that had been prepared between individual countries and the pharmaceutical companies were about to be triggered by the WHO”.

He added: “The relevant contracts were mostly confidential and the companies insist they should never be published.”

When asked about how the WHO and its representatives deal with such health crises, Dr Wodarg replied: “The WHO officials have no idea about such things.

“They have to depend on scientists.

“And the scientists are allocated to them by the countries and by the organisations that finance the WHO.

“And many of them gave advice and made decisions that benefited the pharmaceutical industry.”

The problem in the WHO relying on scientists as advisers is that many of them have conflicts of interest.

At the time, the WHO working group on Swine Flu consisted of 13 external consultants.

Two of them reported conflicts of interest – among them, Professor Neil Ferguson, the UK’s senior SAGE adviser who recently resigned after it emerged he had flouted lockdown rules.

Conflicts of interest must be declared by scientists before they join WHO advisory boards – revealing what scientists have ties with the pharmaceutical industry.

Taking Prof Ferguson’s case in isolation, he declared conflicts of interest – having received consultancy fees with GlaxoSmithKline, Baxter, and Roche.

These were the eventual manufacturers of Swine Flu vaccines and medications.

As a result, an issue with the conflicts of interest being allowed by the WHO is that those scientific advisers may demonstrate bias and favouritism towards the pharmaceutical companies they work with.

In a 2010 interview with the pharmaceutical publication, Scrip, Prof Ferguson explained the extent of his ties to the companies.

He said: “I chose to end the relationship with GSK and Roche in 2007 due to the mounting pressures of other (more important) work, and because I wanted to pursue advisory work with public bodies which is more easily done without current relationships with commercial companies.”

He added: “I think it would be difficult to find a true expert on influenza vaccines and antiviral drugs who has not worked at some time with pharma companies.

“The development of such products is undertaken by commercial companies, they have the data, and they are interested in research which relates to their products.

“I think science generally benefits from links between academic and commercial research, as does the quality of scientific advice offered to public health agencies.”

Express.co.uk contacted Prof Ferguson days before he resigned to ask whether he had declared any conflicts of interest during the current coronavirus pandemic.

Prof Ferguson said: “I have no commercial consultancy interests, and have not had for several years.

“For the reasons previously stated, I have no links with pharmaceutical and/or vaccine companies related to work on pandemics.

“My only links to vaccine and pharmaceutical companies are in the area of dengue (a mosquito borne virus which is a research interest of mine).

“I receive no personal income or expense payments from that work.

“I am a co-investigator on a research grant funded by a pharmaceutical company to analyse early preclinical data on a novel drug to treat dengue fever.” Source