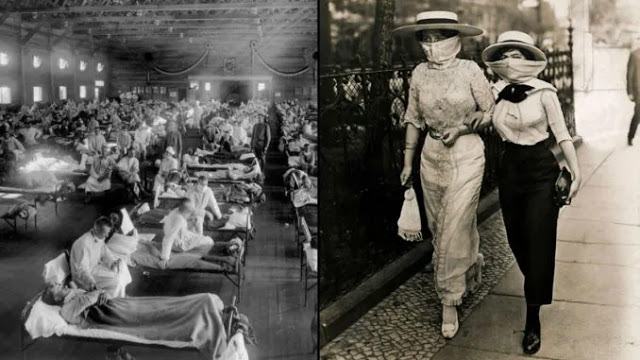 Millions of people could die if the coronavirus pandemic sees a second wave of infections, a World Health Organization official warned on Friday.

Dr Ranieri Guerra, WHO assistant director-general for strategic initiatives said that the coronavirus pandemic has so far unfolded just as the UN health agency had anticipated.

He said the Spanish Flu, which saw 50 million deaths during its second wave over 100 years ago, had behaved ‘exactly’ like the coronavirus

Guerra said the 1918 pandemic ‘fiercely resumed’ in September and October, when the temperatures were cooler, following a dip. This is what Bill Gates is also warning us to expect with the coronavirus.

The Mail Online reports: His warning was echoed by European Central Bank chief Christine Lagarde, who said on Friday that ‘of course there could a severe second wave if we learn anything from the Spanish Flu of 1918-19.’

The Spanish Flu outbreak ravaged numerous countries around the world, including Britain, where there were more than 220,000 deaths and the US, where 675,000 died.

The virus first appeared in the spring of 1918 but appears to have mutated when it surged again in the fall, making for a deadlier second wave.

It was made worse by the fact it struck as the First World War was coming to an end.

‘It came back roaring and was much worse,’ epidemiologist Dr. William Hanage of Harvard University’s T.H. Chan School of Public Health said.

Warmer temperatures have been found to slow the spread of coronavirus.

Researchers found that virus transmission slows down after temperatures reach 50F or above, but not significantly enough to make cases completely disappear.

Epidemiologists said there is no formal definition of a second wave, but they know it when they see it.

Dr Guerra’s comments are concerning because countries in Europe and across the world are beginning to relax lockdown measures, even as the number of coronavirus cases and deaths globally continues to rise.