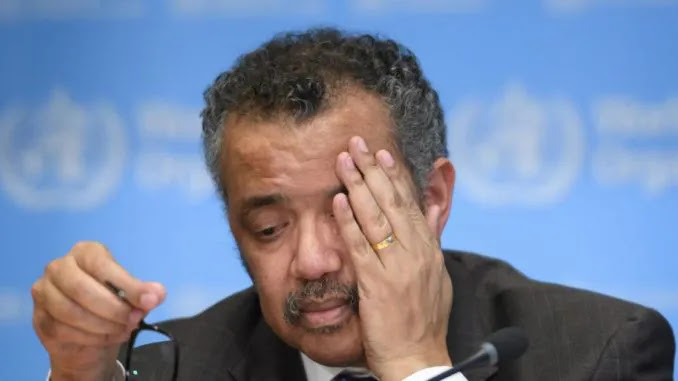 The Director-General of the World Health Organization (WHO) is facing a call for prosecution over his alleged involvement in directing security forces in his Ethiopian homeland.

An American economist nominated for the Nobel Peace Prize, David Steinman, accused WHO chief Dr Tedros Adhanom Ghebreyesus of being one of three officials in control of the Ethiopian security services from 2013 to 2015 according to a report by The Times

Breitbart reports: Tedros was the country’s health minister from 2005 to 2012 and its foreign minister until 2016, when his communist Tigray People’s Liberation Front (TPLF) was the main member of the ruling coalition.

Analysts, reportedly including American government officials, have listed the TPLF in the Global Terrorism Database.

The Times says Steinman, an economist and campaigner nominated for the peace prize last year, lodged the complaint at the International Criminal Court (ICC) in The Hague.

He alleged Tedros “was a crucial decision maker in relation to security service actions that included killing, arbitrarily detaining and torturing Ethiopians.”

The complaint to prosecutors at the ICC comes after General Berhanu Jula, Ethiopia’s army chief of staff, called last month for the WHO leader to resign. He accused him of trying to procure weapons for the Tigray region, where the Ethiopian army is fighting local forces.

In his complaint, Steinman pointed to a 2016 U.S. government report on human rights in Ethiopia that found the “civilian authorities at times did not maintain control over the security forces, and local police in rural areas and local militias sometimes acted independently”.

Steinman added the U.S. report cited “other documented crimes”. He accused Tedros of being involved in the “intimidation of opposition candidates and supporters”, including “arbitrary arrest . . . and lengthy pre-trial detention”.

According to the Times, the complaint also alleged that Tedros oversaw the “killing, and causing serious bodily and mental harm to, members of the Amhara, Konso, Oromo and Somali tribes with intent to destroy those tribes in whole or in part.”

Tedros has denied the allegations and any wrongdoing. As recently as last month he issued a statement addressing the current situation in Tigray.

“There have been reports suggesting I am taking sides in this situation,” he said. “This is not true and I want to say that I am on only one side and that is the side of peace.”

This is not the first time Tedros has been at the center of controversy in his Ethiopian homeland.

The role of good-will ambassador is largely symbolic, but rights groups were scathing in their reaction to the symbolism of giving it to a man whose leadership, they say, has led to the collapse of its health service and major rights abuses in Zimbabwe.

Ultimately, Tedros rescinded his decision to favor Mugabe in the wake of criticism.

Earlier this year, President Donald Trump announced the United States would leave the W.H.O. in July 2021 after accusing Tedros of not doing enough to hold China to account for initial attempts to conceal the coronavirus outbreak from the rest of the world.

1 Anonymously • 18:55, 14.12.2020
PSO vyriausiasis Tedrosas Adhanomas gali patirti kaltinimus dėl genocido
TAIP PAT SKAITYKITE:
02.03.2021 laikas 20:37 It begins: Employer – ‘If you’re not vaccinated, you’re not working here.’ Welcome to the future of America?
Many citizens in the United States are facing the possibility of mandatory COVID-19 vaccinations, implemented by employers, cities, states, or even through federally-related regulations.