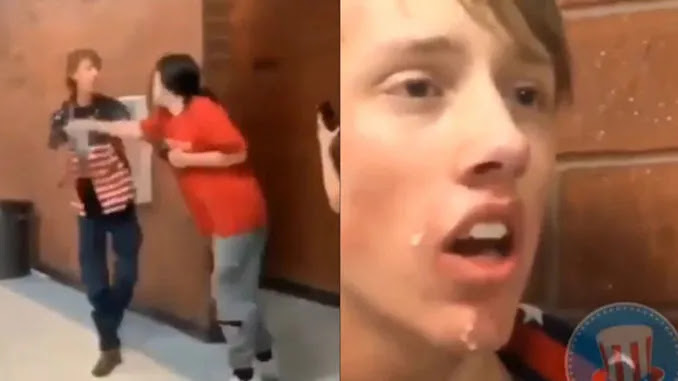 A brutal assault on a teenage Trump supporter wearing a MAGA hat was captured on video before going viral on social media.

The 15-year-old boy had his MAGA hat stolen by a female classmate, who refused to give it back.

“Look how f****** stupid you look,” the girl screams, before spitting on his face.

The boy then tries to take back his MAGA hat.

The boy then attempts to take his hat back before a second female student intervenes and punches the boy in the face.

The girl then continues to threaten more violence:

Does anyone know where or when this was?

A young student was bullied, spit on, and had his hat stolen by some little monster for being a Trump supporter. pic.twitter.com/mzHuzIVi7G

Thegatewaypundit.com reports: The Gateway Pundit is not naming the student, due to his age, but spoke to his mother Meshyalah McElhaney who said that the girls involved have been expelled and there will likely be criminal charges.

“He has not attended public school since 1st grade, he has attended charter schools and was doing online. This year he was taking two electives at public school and this happened just two weeks in. He is solely doing online now. He is 15 in 10th grade,” McElhaney told the Gateway Pundit. “I am so incredibly proud of him for holding his ground and not giving into her and retaliating.”

McElhaney said that one of the girls is going to be charged with a felony and the other is still unclear if it will be a misdemeanor of felony. Both of the girls were also in tenth grade.

The school recently had to switch to online schooling due to a spike in COVID cases, making the mask theft and spitting even more egregious.

The Gateway Pundit has spoke to officials within the Trump administration and the campaign to hopefully hook him up with an upgraded and signed hat.

A GoFundMe has also been launched so that his family can take him on a trip or do something special with him.

1 Anonymously • 18:33, 13.10.2020
Štai jums ir liberalizmas, norintiems džiaugtis...
TAIP PAT SKAITYKITE:
26.10.2020 laikas 20:48 The United States is developing a system for warfare controlled by artificial intelligence
Earlier last month, a US Air Force pilot donned a virtual reality helmet and scanned the area to obtain a 3D map of the surrounding area. He saw a moving object, which the AI ​​had warned is likely a cruise missile....