Jack Nicklaus: I Voted For Trump To Bring Back ‘American Dream’ and Avoid ‘Socialist America’ 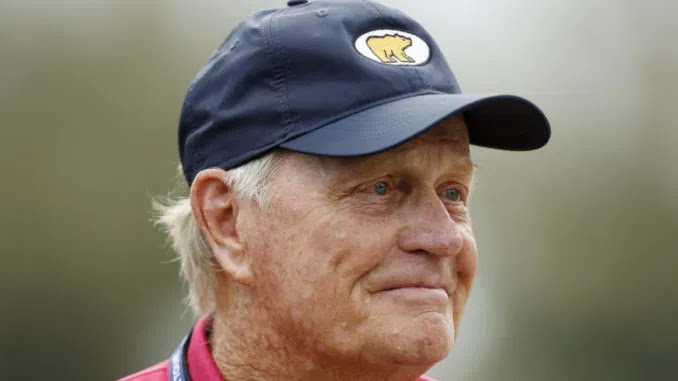 18-time golf major winner Jack Nicklaus has announced that he has voted to re-elect President Donald Trump because he “delivered on his promises.”

Nicklaus posted a lengthy statement on his Twitter account on Wednesday evening in which he claimed electing Trump is key to avoiding “a socialist America and have the government run your life”.

President Trump replied: ‘Jack, this is a Great Honor. Thank you!‘ and proudly pinned the tweet to the top of his timeline. 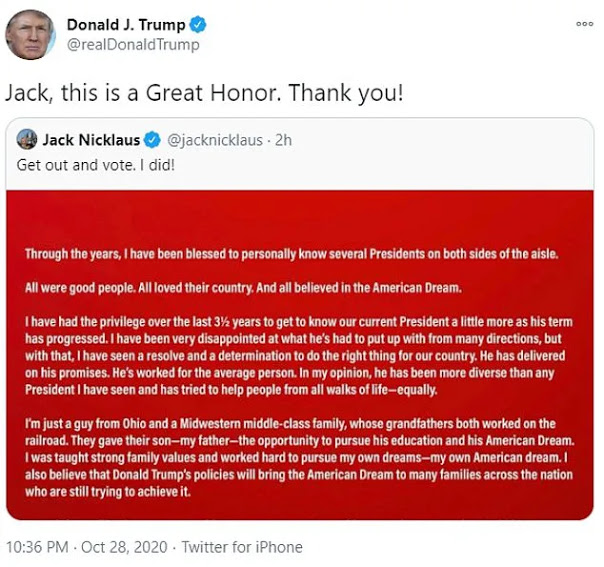 DailyMail report: Nicklaus included a lengthy explanation of his choice, saying that he had got to know the president better over the last three and a half years, and had been disappointed by the criticism of him.

‘He has delivered on his promises. He’s worked for the average person. In my opinion, he has been more diverse than any president I have seen and has tried to help people from all walks of life – equally,’ said the Ohio-born golfer.

Nicklaus said that his grandfathers both worked on the railroads, but he had ‘worked hard to pursue my own dreams – my own American dream.’

Since 1970 Nicklaus himself has lived in Florida, in a house overlooking Lake Worth Lagoon, near Mar-a-Lago in Palm Beach County. 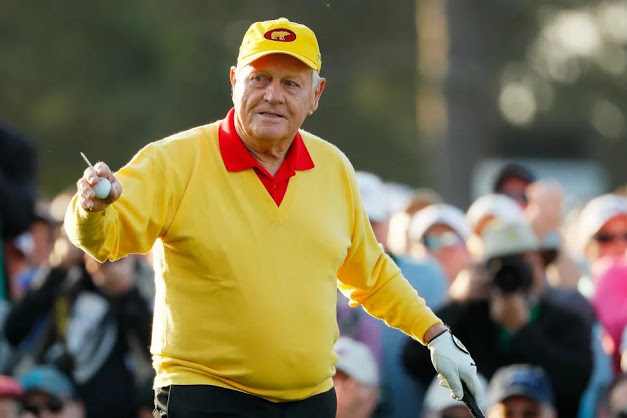 He said he believes Trump’s policies will bring the American Dream to many families across the nation.

The 18-time Major champion said he did have his disagreements with the president, in particular his choice of language.

But Nicklaus said he had to look beyond that.

‘His love for America and its citizens, and putting his country first, has come through loud and clear,‘ he said.

Nicklaus said he is encouraging everyone to vote and ‘strongly recommends‘ voters consider Trump.

The golfer’s support for Trump is not new.

‘He’s turning America upside-down, he’s awakening the country,’ Nicklaus said. ‘We need a lot of that.’

‘I’ve done several things with Donald on golf courses, and he’s absolutely treated me great,‘ said Nicklaus, in an interview with CBS. ‘He’s been aboveboard.’

Nicklaus and the president have played golf together several times.

In February 2019 they were joined for a round in Jupiter, Florida, by Tiger Woods.

In July Nicklaus revealed that he and his wife had both tested positive from coronavirus in the spring.

Speaking during a weather delay in final round play of the Memorial Tournament that he hosts, Nicklaus said that while he had symptoms of the illness, his wife was asymptomatic.

‘Barbara was asymptomatic, I had a sore throat and a cough, it didn’t last very long,’ said Nicklaus in an interview with CBS.

‘We were very, very fortunate, we were lucky.’

The couple self-isolated at their home in south Florida from March 13 to April 20, and have since recovered.