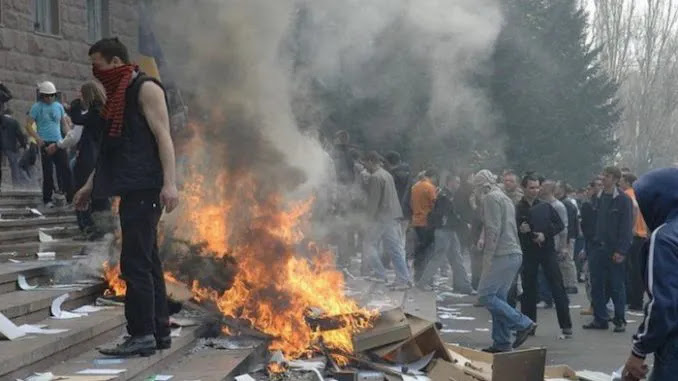 A federation of anti-Trump far-left groups is secretly plotting to mobilize and prepare for what it envisions as a “political apocalypse” full of violence if Joe Biden fails to win the presidency on November 3.

“Occupy shit, hold space, and shut things down, not just on Election Day but for weeks,” an anonymous source said in describing the federations effort, nicknamed the “Democracy Defense Nerve Center.”

The radical group discussed their plans in secret during a Zoom virtual meeting.

Referring to the secret meeting, the Daily Beast noted:

Over the course of two hours, participants broached the question of what the progressive political ecosystem can functionally do in a series of election scenarios. They began charting out what it would take to stand up a multi-state communications arm to fight disinformation, a training program for nonviolent civil disobedience, and the underpinnings of what one official described as “mass public unrest.”

Breitbart.com reports: An unnamed aide to the Biden campaign told the Daily Beast it is “aware of the concerns expressed by many of these [leftist] groups” that are “actively planning for all contingencies and scenarios.”

Before officials get a chance to tally the votes, the FBT alliance is pushing the Democrat assumption that the election will be illegitimate absent a huge Biden victory.

The leftist coalition is explicitly making preparations to deal with a situation where the “November election ends without a clear outcome or with a Joe Biden win that Donald Trump refuses to recognize,” the Daily Beast noted.

“Inside the coalition, there is [a] dispute over whether Biden should even concede if he wins the popular vote but loses the Electoral College,” the news outlet acknowledged.

In that event, the coalition may take a page from the election “war games” report by the vehemently anti-Trump Transition Integrity Project (TIP), which urges Biden to push Western states, namely California and Oregon, “to secede from the Union” unless their potential demands for reforms — abolishing the Electoral college, dividing California into five states, and statehood for Puerto Rico and D.C. — are met, the Daily Beast indicated.

“It’s the hardest scenario,” an unnamed source participating in the FBT discussions said, referring to the possibility of an Electoral College-popular vote split.

“I think both sides are going to fight this till the very end,” the source added.

The coalition is making its post-election plans around the 22-page TIP report, titled “Preventing a Disrupted Presidential Election and Transition.”

Any other scenario, except a Biden landslide, will spark “catastrophe,” including “violence in the streets and a constitutional impasse,” Rosa Brooks, a Georgetown University law professor and co-founder of TIP, wrote in a September 3 editorial for the Washington Postsummarizing the report.

Democrats are baselessly promoting the notion that President Donald Trump will refuse to leave office if he loses, calling on their supporters to prepare to mobilize in case that happens.