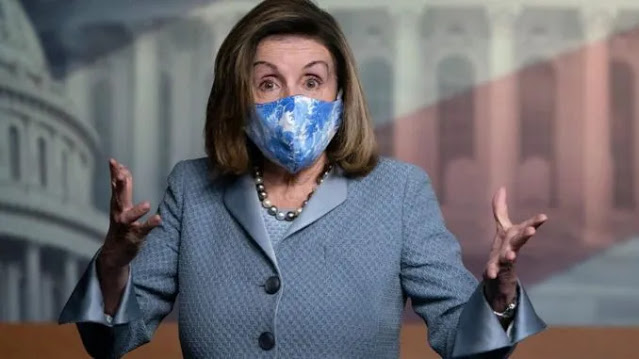 House Speaker Nancy Pelosi told reporters that Joe Biden will defeat President Trump and will be inaugurated on January 20………..regardless of what the vote count on Election Day shows.

RT reports: Pelosi made the comments in the context of preparing to govern with Democrat control of both Congress and the White House, saying, “we have to be ready for how we are going to go down a different path.”

Reporters joined her in treating the election result as fait accompli, asking not about her curious phrasing about the election, but instead how House Democrats intend to work through differences between moderate and far-left factions of the party.

“Our caucus has a beautiful array of thinking, of generational, gender, gender ID, ethnic background, geographic differences and the rest, but the one thing that unites us is our commitment to America’s working families,” Pelosi responded.

Speaking on MSNBC the evening before, Pelosi urged Trump to “stand up like a man and accept the results” of the election, which she presumed were a foregone conclusion.

“The states will count the votes that they have in a timely fashion,” Pelosi said, adding that Trump allegedly saying he would declare victory on election night “shows his lack of patriotism, his undermining of our elections while he allows foreign countries like his friend [Russian President Vladimir] Putin to undermine the integrity of our election, he himself is doing it as well.”

The best thing the President can do for our country is to stand up and take the results of this election like a man. #MSNBCLive pic.twitter.com/FmwoQCqK0Q

Fox News host Sean Hannity took notice of Pelosi’s curious phrasing, while his mostly Republican audience took Pelosi’s words as a threat. One commenter called Pelosi’s statement “a blatant admission that they will cheat by any means necessary.” Another tweeted, “Sounds like she is talking about open sedition,” while still another said, “Civil War II is near.”

PELOSI: Biden Will Be Sworn-In as President ‘Whatever the End Count is on Election Day’ https://t.co/kmXmN7irqd

Failed 2016 Democrat presidential candidate Hillary Clinton set off similar alarm bells in August, when she said Biden should not concede defeat “under any circumstances.”Ironically, it was Clinton who said repeatedly during the 2016 campaign that Trump was “threatening our democracy” by not promising in advance to accept the apparent results of voting on election night.

Another failed Democrat candidate, 2000 election loser Al Gore, muddied the waters further the day after Clinton’s statement aired, saying Trump would be forced from office by military and security forces if he refuses to leave on inauguration day.

Biden himself had said back in June that he was “absolutely convinced” the US military would “escort [Trump] from the White House with great dispatch” if the president loses the election but refuses to concede.

Pelosi has also refused to budge on her demands in talks about Covid-19 relief with the Trump administration, apparently as convinced that Trump needs it more than the Democrats as she is of Biden’s triumph next week. Treasury Secretary Steve Mnuchin, who has been negotiating with Pelosi, accused the speaker on Thursday of a “political stunt“ after she sent a letter to his office at midnight the day before, and released it to the press at the same time.