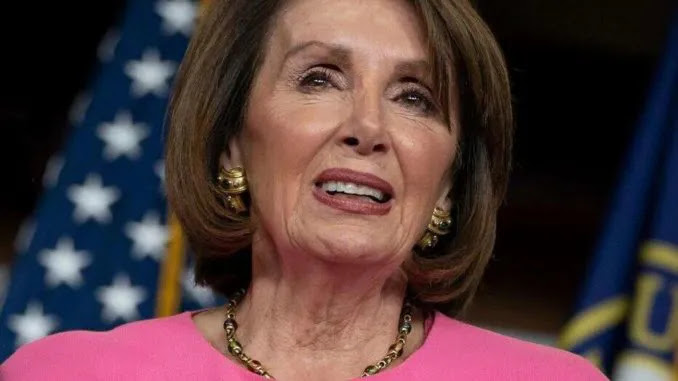 A White House petition to “Impeach Nancy Pelosi for Treason” has gained a staggering 404,000 signatures from patriots who believe the House Speaker is a “traitor to the American People” and must face justice.

The “We the People” petition calls on Congress to impeach the House Speaker and accuses Pelosi of being “a TRAITOR to the American People.”

At the time of publishing, the viral petition has amassed more than one 404,800 signatures from patriots – more than four times the minimum of 100,000 required to receive an official response.

Cnsnews.com reports: The Georgia woman who created the petition in January, Marjorie Taylor Greene, personally delivered a copy of the petition to Speaker Pelosi’s House office on February 22 last year.

Greene continues to encourage Americans to sign the petition, aided by President Donald Trump’s recent calls for Pelosi’s impeachment for the way she has conducted her impeachment inquiry of him.

Since posting the petition, Greene – a business owner, wife and mother – has launched a campaign to become the Republican House candidate for Georgia’s 6th district. Last week, she met with members of the House Freedom Caucus and its founder, Rep. Jim Jordan (R-Ohio).

The petition argues that House Speaker Nancy Pelosi (D-Calif.) is a traitor to the United States because she provides support to its “enemies” – illegal immigrants – by opposing border wall funding and by supporting sanctuary cities and tax-funded benefits for illegal aliens:

Nancy Pelosi is a TRAITOR to the American People!
The Constitution defines, “Treason against the US.. ..adhering to their Enemies, giving them Aid and Comfort.” Illegal aliens are enemies that invade our country with drugs, human trafficking, and terrorist causing death and crime to American citizens. Nancy Pelosi adheres to these enemies by voting for and providing them aid and comfort through Sanctuary policies funded by US citizen tax dollars, and refuses to protect American people by refusing to fund our border wall, leaving our borders open and unsafe. Pelosi refused to meet with Angel families, caused the government shut down then traveled on US dollars to Hawaii and Puerto Rico while 800,000 Fed workers don’t get paid, and uninvited Trump for SOTU. IMPEACH Pelosi for treason!

While the U.S. Constitution does say civil servants may be removed through “impeachment” – which must be tried by the Senate, it also says either chamber of Congress may “expel” one of its members via a two-thirds vote by the members of that chamber:

“Each House may determine the Rules of its Proceedings, punish its Members for disorderly Behaviour, and, with the Concurrence of two thirds, expel a Member.” – Article 1, section 5, clause 2

“The President, Vice President and all civil Officers of the United States, shall be removed from Office on Impeachment for, and Conviction of, Treason, Bribery, or other high Crimes and Misdemeanors.” – Article 2, section 4

“The Senate shall have the sole Power to try all Impeachments. When sitting for that Purpose, they shall be on Oath or Affirmation. When the President of the United States is tried, the Chief Justice shall preside: And no Person shall be convicted without the Concurrence of two thirds of the Members present.” – Article 1, section 3, clause 6

As the White House “We the People” website explains, the petition platform empowers every American citizens “to become an agent of change” – and, if a petition gains 100,000 signatures in 30 days, the White House will “make sure it gets in front of the appropriate policy experts”:

“We the People is a platform that empowers the American public to take this action like never before – it’s a way for anybody, anywhere, to speak directly to the government and become an agent for change.

“With We the People, you can easily create a petition online, share it, and collect signatures. If you gather 100,000 signature in 30 days, we’ll review your petition, make sure it gets in front of the appropriate policy experts, and issue an official response.”

Greene tells CNSNews.com that she has yet to see the “official response” promised by the White House website.