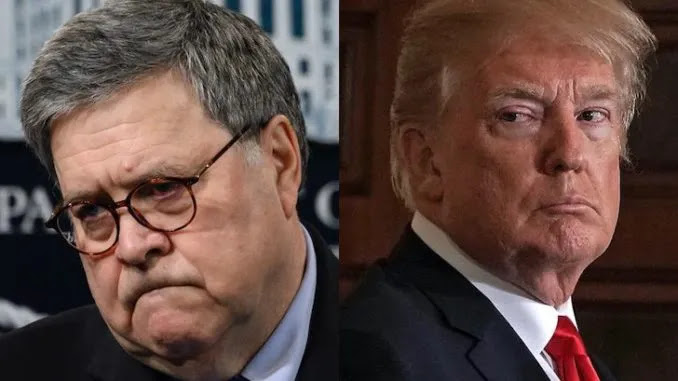 Attorney General William Barr is considering resigning within a matter of weeks, according to a report by the New York Times.

Barr was appointed by Trump in November 2019 to replace Deep State stooge Jeff Sessions who had allowed Democrats to walk all over him and pursue their Russia witch hunt.

Barr, however, has failed to prosecute those responsible for the witch hunt and has even refused to step up and intervene following America’s most fraudulent election this November. Barr even said last week that he hasn’t seen any evidence of widespread fraud that would change the results of the election.

Thegatewaypundit.com reports: Trump reportedly had an “intense” meeting with Barr at the White House after his comments went public.

Last Wednesday, a day after the reported meeting, White House Press Secretary Kayleigh McEnany declined to say if Trump had confidence in Barr, saying in response to a reporter’s question, “If we have any personnel announcements, I’ll let you know.”

Attorney General William P. Barr is considering stepping down before President Trump’s term ends next month, according to three people familiar with this thinking. One said Mr. Barr could announce his departure before the end of the year.

It was not clear whether the attorney general’s deliberations were influenced by Mr. Trump’s refusal to concede his election loss or his fury over Mr. Barr’s acknowledgment last week that the Justice Department uncovered no widespread voting fraud. In the ensuing days, the president refused to say whether he still had confidence in his attorney general.

One of the people insisted that Mr. Barr had been weighing his departure since before last week and that Mr. Trump had not affected the attorney general’s thinking. Another said Mr. Barr had concluded that he had completed the work that he set out to accomplish at the Justice Department.

…Mr. Barr has not made a final decision, and the prospect of him staying on through Jan. 20 remains a possibility, the people familiar with his thinking cautioned.

UPDATE: The Times report was confirmed by the Washington Post in an article published Sunday night (excerpt):

Attorney General William P. Barr has told associates in recent weeks that he may leave his post before the Trump administration ends next month, according to people familiar with the discussions.

Barr, in his second stint as the nation’s top law enforcement official, since the fall has been the target of growing criticism from President Trump and his supporters — public attacks that intensified in recent days after the attorney general said the Justice Department had not found evidence of widespread voter fraud that could affect the outcome of the presidential contest. But people close to the attorney general, speaking on the condition of anonymity to describe private conversations, said Barr’s contemplation of resigning before Jan. 20 predates that fresh burst of criticism from the right.

Barr first broached the topic with associates shortly after Election Day, when it became clear that former vice president Joe Biden had won, according to one person familiar with the conversation. Before the election, Barr had told friends that if Trump won, he would like to stay on as attorney general for some time in the second term.

One adviser to the president told The Washington Post last week that Barr could be fired. The New York Times reported Sunday that the attorney general was considering stepping down before mid-January…