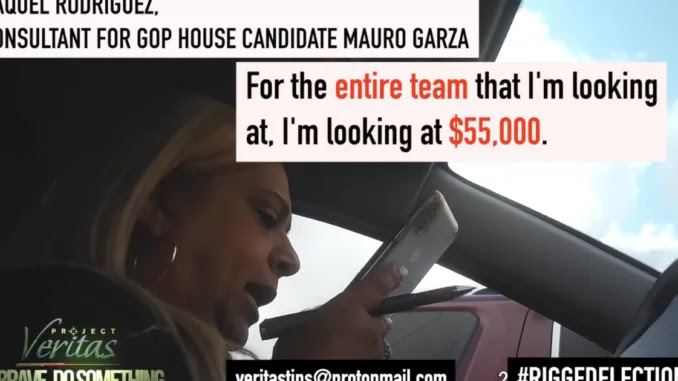 Undercover footage of a ballot chaser admitting to massive voter fraud to help rig the election for Joe Biden in Texas has been released by Project Veritas.

The bombshell new video is part of an undercover investigation into a Texas “Republican” consultant who was caught on camera violating both Texas and federal laws by coercing and bribing voters into voting Democrat.

In the footage, Raquel Rodriguez, a consultant for GOP House candidate Mauro Garza, admits she will be making about $55,000 to change 5,000 votes, as rigging the election costs “five to eight dollars per vote.”

She didn’t explain who is paying her for illegally flipping votes for Democrats, but did explain that “some of my Republicans are precinct chairs that cannot be known… they want to help Biden.”

“$55k for 5k votes, top of the ticket, Hegar/Biden”#RiggedElection pic.twitter.com/76qePEuOYR

TGW report: Rodriguez stated that she is getting paid to help Republicans who want to flip votes for Biden, saying “yeah, that’s what I’m doing. That’s exactly what I’m getting paid to do.”

In Tuesday’s video, Rodriguez was seen providing a gift to an elderly woman after coercing her into changing her vote and helping her change the ballot.

“If I go to prison, I do not look cute in stripes…I will hate you forever.”

“You know on here you chose a Rep, not a Dem right?”#RiggedElection pic.twitter.com/npn4CbJzIi

“Now, you know on here you chose a Republican, not a Democrat, right?” Raquel Rodriguez tells the voter.

The voter responds, “Can I do that?”

Rodriguez replies, “You can do, you can vote for whoever you want. But our conversation that we had, you said you were voting for Hegar because you were going straight Democrat.”

Rodriguez is seen on camera taking the ballot from the voter and helping her fill it out.

Later on, Rodriguez admits that what she is doing is illegal and brags about giving the elderly voter a pretty shawl as a gift for her Democrat vote!

“That’s illegal. I could go to jail,” Rodriguez tells a Project Veritas undercover journalist. “If I go to prison, I do not look cute in stripes…I will hate you forever.”

Buying votes is illegal under both federal and Texas law.