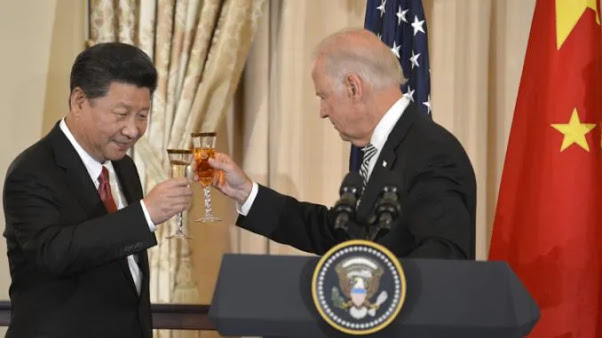 A former business partner of Hunter Biden claimed on Tuesday that Democratic presidential nominee Joe Biden and the Biden family are compromised due to business dealings with people and companies tied to the Chinese Communist Party.

In an explosive interview with Tucker Carlson on Fox News, Tony Bobulinski claimed that the Biden family’s relationship with Chinese firms could have national security implications and reiterated that Joe Biden was involved in the money-making schemes.

Joe Biden’s insistence that he has no knowledge of, or links to, his son’s business affairs is a “blatant lie,” Tony Bobulinski said

RT reports: Bobulinski went public last week after emails published by the New York Post purportedly detailed a business arrangement involving the Bidens, Bobulinski and CEFC China Energy, a firm that allegedly has ties to the Chinese Communist Party. Bobulinski had previously stated that the ex-vice president, referred to in the leaked email as the “big guy,” was receiving a cut from the deal. In his interview with Carlson, he elaborated on a meeting he had with the Democratic presidential nominee, claiming that it was “crystal clear” the veteran politician was intimately familiar with his son’s business ventures.

He said that he had been “asked” to meet with Biden and that, judging from their conversation, he believed he was being vetted by the former vice president before going forward with their deal.

“There was no other reason for me to be in that bar meeting Joe Biden than to discuss what I was doing with his family’s name and the Chinese,” he told Carlson.

Tony Bobulinski: It is a "blatant lie" when Joe Biden said he had no knowledge of Hunter Biden’s business dealings.

"There was no other reason for me to be in that bar meeting Joe Biden then to discuss what I was doing with his family's name and the Chinese." pic.twitter.com/gdHZYvGKq4

Bobulinski recounted a separate conversation with the former Delaware senator’s brother, Jim, in which he asked how the Biden family was “able to get away with” its questionable business practices.

“He looked at me, and he laughed a little bit, and said ‘plausible deniability’,” Bobulinski recalled.

Hunter Biden's ex-business partner Tony Bobulinski: "I remember looking at Jim Biden and saying how are you guys getting away with this? Aren't you concerned? He looked at me, and he laughed a little bit, and said 'PLAUSIBLE DENIABILITY.'" pic.twitter.com/IxbND1IbWV

“I think Joe Biden and the Biden family are compromised,” he told Carlson when asked how he thought a Biden administration would deal with Beijing if the Democratic nominee wins the White House.

“I don’t see, given the history here and the facts, how Joe can’t be influenced in some manner based on the history they have here with CEFC.“

Tucker Carlson: "If Joe Biden is elected President, how does this constrain his ability to deal with China?"

Tony Bobulinski: "So, I think Joe Biden and the Biden family are compromised" pic.twitter.com/tIUmH0a5eL

Bobulinski came forward after a tranche of emails and other messages were allegedly found on a hard drive abandoned by Hunter Biden at a computer repair shop in Delaware. The Biden campaign has denied that the Democratic presidential nominee is somehow implicated in the business dealings of his family.