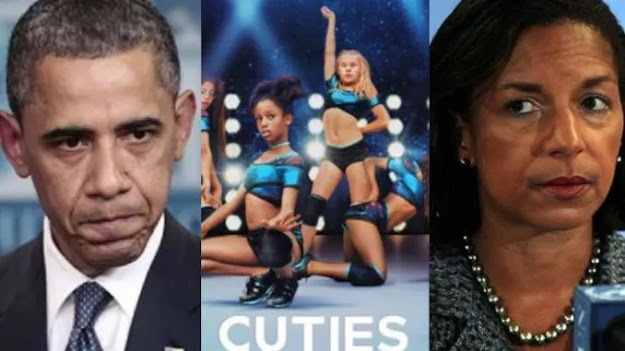 The Obamas and Susan Rice have so far remained silent on the firestorm surrounding Cuties, a Netflix drama accused of blatantly sexualizing pre-pubescent children.

Both the Obamas and Rice are closely connected with the streaming service, with the former president and first lady in the middle of a “multi-year agreement” signed in May 2018 to help produce films and series for the platform.

Rice, a former National Security Adviser, was appointed to the Netflix board that same year.

Breitbart.com reports: Unlike a normal dance group for girls her age, the children’s activity involves highly provocative and sexualized dancing, with twerking (a style predicated on shaking one’s buttocks up and down) at the center of their performances.

The film has provoked outrage among the wider population, with its YouTube trailer attracting an incredible 1.6 million dislikes compared to just 39,000 thumbs up. Meanwhile, around 600,000 people have signed a petition pledging to cancel their Netflix subscription because of the film, while the hashtag #CancelNetflix trended on Twitter on Thursday.

“As I have been researching content that exploits children and creates a disturbing vibe, I have found many shows and movies on Netflix to have similar inappropriate behaviors as Cuties, the movie this petition was originally based off,” the latest petition states. “From cuties to Big Mouth to other movies mocking religions and exploiting children Netflix is no longer the family-friendly streaming service I once believed it to be!”

Netflix has so far refused to condemn any aspect of the film’s content. However, they did issue an apology last month for a promotional image that showed girls posing in skimpy outfits.

We're deeply sorry for the inappropriate artwork that we used for Mignonnes/Cuties. It was not OK, nor was it representative of this French film which won an award at Sundance. We’ve now updated the pictures and description.

In his review of the film, Breitbart film critic John Nolte described Cuties as both “dull and indefensible.”