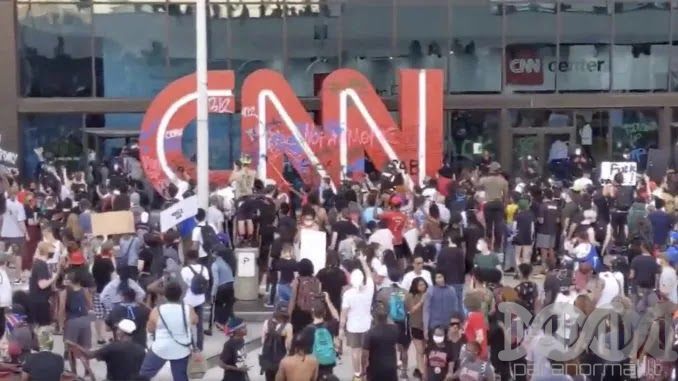 His death has sparked angry protests across the country, including three consecutive nights of demonstrations in Minneapolis that saw the burning down of a police precinct.

RT reports: Footage shared on social media showed a raucous crowd as they rallied at the building’s entrance, blocked from entering by a police line inside.

CNN HQ in Atlanta getting overrun by leftist protesters that they themselves whipped into a frenzy.

Many are defacing and vandalizing the giant CNN logo outside the building.

You're watching Dr. Frankenstein get destroyed by his own monster.#GeorgeFloyd pic.twitter.com/i6EP0Tl8z5

Police cars parked nearby were not spared by the protesters, one even set ablaze while others had windows smashed out.

Protesters getting dispersed by police as the destruction if police cars outside the CNN Center continues pic.twitter.com/CoRwbKY7jj

Protests have turned destructive in #Atlanta. Outside #CNN Center at least one police vehicle caught fire, several others are also damaged. https://t.co/XTQ7GVo3Bo pic.twitter.com/N3XA3sumDB

A number of armored vehicles and additional law enforcement were brought in to reinforce the heavy police presence as the standoff continued, with at least 18 officers clad in riot gear blocking the entrance of the headquarters, according to CNN.

#BREAKING: Armored vehicles have just arrived outside of CNN center where tensions are high between protesters and police. WATCH LIVE: https://t.co/izwmSdUyF3 pic.twitter.com/MuNEs6Keqg