Does the solar system have a “Planet Nine”? Researchers say it’s a possibility 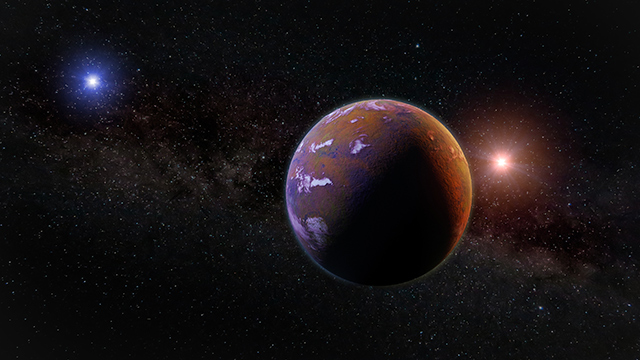 (Paranormal) A planet orbiting a pair of stars more than 300 light-years away may offer clues to a mystery object called “Planet Nine” that is thought to reside in the outskirts of the solar system.

Scientists from the University of California, Berkeley and the European Southern Observatory (ESO) in Chile performed the first complete orbital measurements on a Jupiter-like exoplanet whose orbit is unusually far from its host stars and the disk of debris around this stellar pair.

The disk is similar to the Kuiper Belt, a doughnut-shaped ring of icy objects located beyond Neptune, and Planet Nine is suspected to be lying far outside of this belt on a similarly strange orbit. While it remains to be seen whether Planet Nine exists, the researchers’ measurements are evidence that such oddball orbits are possible.

“This system draws a potentially unique comparison with our solar system,” said lead author Meiji Nguyen of the Department of Astronomy at UC Berkeley.

“It’s very widely separated from its host stars on an eccentric and highly misaligned orbit, just like the prediction for Planet Nine,” added Nguyen. The findings of the study were published on Dec. 10 in the Astronomical Journal.

How the exoplanet ended up on the fringes

The exoplanet, called HD 106906 b, was discovered in 2013 using the Magellan Telescopes at the Las Campanas Observatory in Chile. It orbits a pair of bright, young stars at a distance of more than 730 times Earth’s distance from the sun, or nearly 6.8 billion miles. At that distance, the planet completes an orbit every 15,000 years, making it enormously difficult to determine its entire orbital motion.

The researchers used data taken using the Hubble Space Telescope to provide evidence for the unique orbit of the exoplanet. They found that its orbit is misaligned, elongated and extremely far away from the disk of debris surrounding its host stars. The disk also looks unusual; it is more asymmetric than circular like a “pizza pie.” This odd shape is likely due to the gravitational pull of the wayward planet, according to the researchers.

The team posits that the planet was initially much closer to its host stars, around three times Earth’s distance from the Sun. But the drag within the star system’s gas disk forced the planet even closer to the stellar pair. Because the stars were whirling around each other, they produced chaotic gravitational effects that kicked the planet out into an eccentric orbit that almost ejected it into interstellar space. However, a passing star from outside the star system stabilized its orbit and prevented it from leaving, according to the researchers.

“The idea is that every time the planet comes to its closest approach to the binary star, it stirs up the material in the disk,” explained co-author and ESO scientist Robert De Rosa.

Planet Nine booted out by Jupiter

The events that led to HD 106906 b’s bizarre orbit may be similar to Planet Nine’s fate. The hypothetical planet might have formed in the inner solar system and got kicked out by its interactions with Jupiter. Previous studies show that the gas giant might have booted out another planet in the outer solar system. The same could have also happened with Planet Nine, but passing stars stabilized it by pushing its orbit away from Jupiter and the planets in the inner solar system.

To date, there’s only circumstantial evidence for Planet Nine: a cluster of small celestial bodies beyond Neptune that move in different orbits than the rest of the solar system. Their unusual orbits suggest that they were shepherded together by the gravitational pull of an unseen, massive planet.