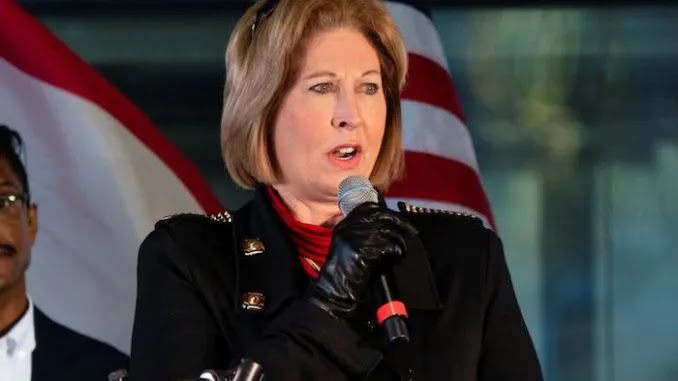 Powell has been at the forefront of fighting voter and election fraud in America.

Most of his advisers opposed the idea, two of the people briefed on the discussion said, including Rudolph W. Giuliani, the president’s personal lawyer, who in recent days sought to have the Department of Homeland Security join the campaign’s efforts to overturn Mr. Trump’s loss in the election.

Mr. Giuliani joined the discussion by phone, while Ms. Powell was at the White House for a meeting that became raucous at times, according to one of the people briefed on what took place. Other administration officials drifted in and out of the meeting, two of the people briefed said, and the White House counsel, Pat A. Cipollone, pushed back on the ideas being proposed.

Theblaze.com reports: The report said it’s not clear how Trump will proceed, adding that Powell described some of Trump’s advisers as “quitters.”

The development is surprising given that Trump’s campaign distanced themselves from Powell, releasing a statement in late November saying that Powell was, in fact, not a member of the campaign’s legal team despite having appeared at press conferences with the campaign’s leading attorneys.

“Sidney Powell is practicing law on her own,” the Trump campaign said. “She is not a member of the Trump Legal Team. She is also not a lawyer for the President in his personal capacity.”

What about voter fraud?

Despite widespread allegations of voter fraud, no evidence ever surfaced proving the claims true. Dozens of court challenges resulted in many of the allegations being tossed with prejudice.

Attorney General William Barr even said earlier in December that the Justice Department investigated credible claims of voter fraud — but found no evidence of widespread wrongdoing.

“To date, we have not seen fraud on a scale that could have affected a different outcome in the election,” Barr said.

Despite the conclusion, Trump has reportedly pushed Barr to appoint a special counsel to investigate allegations of voter fraud, the Times reported, but Barr has refused.