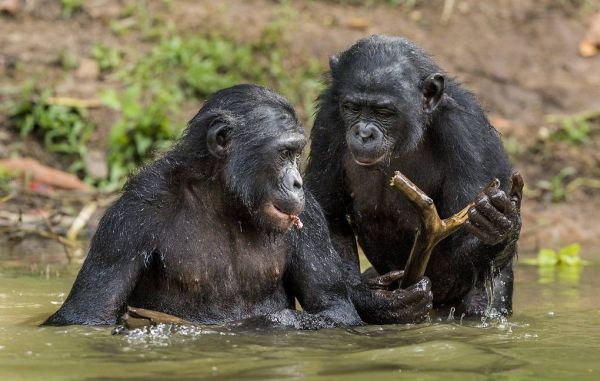 Animal psychologists have followed the friendship of older chimpanzees from Kibale National Park in Uganda and found that they choose friends according to the same principles as older people. An article with the results of the study was published by the scientific journal Science.

“It is believed that with age, people become more choosy in the choice of friends, as they become more aware of their mortality and want to make the most of the remaining time. Chimpanzees are intelligent primates, but they do not realize the finiteness of life. some other processes that explain why in old age their relationships with others become more positive, “- said one of the study authors, professor at Harvard University (USA) Richard Wrangham.

Over the past few years, neurophysiologists and animal psychologists have found ample evidence that typically human intelligence and our ability to display complex emotions are common to many other animals, including dogs, primates, and even ravens.

For example, a few years ago, scientists discovered that dogs communicate with people to gain attention and positive emotions. At the same time, animals understand the intonation and meaning of the words that they hear from the owners. Zoologists have recorded similar, albeit less pronounced abilities and traits of character in horses, pigs and goats.

Wrangham and his colleagues have discovered yet another trait that humans share with chimpanzees. For two decades, scientists have observed the lives of two dozen males who live in western Uganda, in the Kibale National Park.

In total, scientists observed how primates communicated with each other, what relationships they were in and how their social habits changed with the age of 78 thousand hours. The monkeys studied included both relatively young individuals, 15 years old, and elderly chimpanzees, who have lived for more than 40 years.

It turned out that the elderly and young individuals communicated differently with acquaintances and friends. The latter had a wide social circle, they often courted their relatives, not expecting similar feelings on their part. However, the older monkeys had much fewer “friends” and the chimpanzees maintained a warmer relationship with them.

This was expressed, in particular, in the fact that older friends more often and for a longer time courting each other, cleaning the skin of parasites, preferred to sit next to each other when meeting other monkeys, they had relatively many close friends in common. In addition, they were less likely to conflict.

Chimpanzees are virtually indistinguishable from humans in this regard, according to Wrangham and his colleagues. People with age also choose their friends more carefully, and also prefer to behave with them as positive as possible.

So far, scientists cannot say for sure whether this feature of the psychology of humans and chimpanzees has a common neurophysiological and genetic background. They hope that this question will be answered in the course of further research on the social behavior of monkeys.