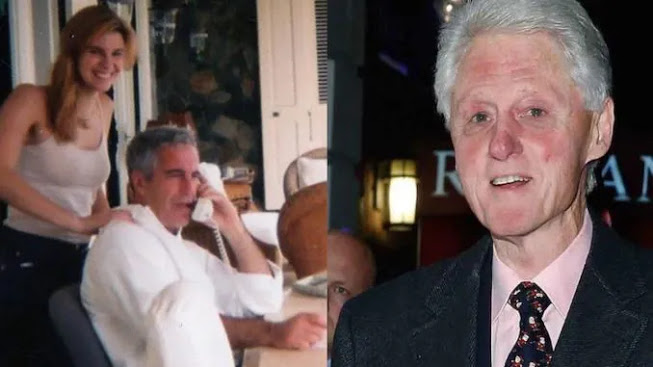 A senior aide to Bill Clinton has blown the whistle on the former President, claiming that Bill Clinton obsessively and repeatedly visited Jeffreey Epstein’s ‘pedophile island‘, despite repeated denials.

Doug Band, who previously accused Chelsea Clinton of using Clinton Foundation funds to pay for her lavish wedding, told Vanity Fair that Chelsea also had an unhealthy and intimate relationship with Epstein and his child pimp Ghislaine Maxwell.

“Band said he had no idea about Epstein’s sex crimes back then but got enough bad vibes that he advised Clinton to end the relationship,” the report states.

“Clinton continued to socialize with Epstein and take his money. In 2006 Epstein donated $25,000 to the Clinton Foundation. Clinton made more than two dozen trips on Epstein’s jet around this time, Epstein’s flight logs show,” the report continues.

“In January 2003, according to Band, Clinton visited Epstein’s private Caribbean island, Little St. James. Band said it was one of the few trips he declined to go on in his time with Clinton.”

Summit.news reports: Band notes that Ghislaine Maxwell was invited to Chelsea Clinton’s wedding in 2010, despite the fact that it was then known that Epstein had committed sex crimes involving underage girls.

Chelsea had ties to Epstein and Maxwell, Band said; he showed me a photo of Bill and Chelsea posing with Epstein and Maxwell at the King of Morocco’s wedding. Chelsea remained friends with Maxwell for years after the press revealed Maxwell was a close associate of Epstein’s. For instance, Chelsea invited Maxwell to her 2010 wedding at the Brooke Astor estate in Rhinebeck, New York, after Epstein had pleaded guilty in Florida to procuring sex from a minor.

Band says that there was one major reason Maxwell was at the wedding. “Ghislaine had access to yachts and nice homes. Chelsea needed that,” the former aide notes.

16) It's no secret that the Clintons were/are good friends with Jeffrey Epstein and Ghislaine Maxwell. Here's Ghislaine at Chelsea Clinton's wedding. pic.twitter.com/XjUXN1hLWs

Band says in the interview that it was only in 2011 that he began to tell Clinton staffers to cut Maxwell out of the picture.

“I knew in telling everyone to stop including Ghislaine that Chelsea and her father would be very angry. It made it harder for them to justify being close to her,” Band says.

Band’s claims that Bill Clinton visited the notorious ‘pedo island’ dovetail with previously unsealed court documents in the Ghislaine Maxwell, which revealed that a witness claims to have seen the former president there with Epstein, Maxwell and “two young girls”.

The documents also echo claims previously made by a former worker on Epstein’s island in a Netflix documentary.

The claims run contrary to denials by Clinton that he ever visited the island, which was reportedly the site of multiple sexual assaults of underage women by the convicted pedophile Epstein and his elite guests.