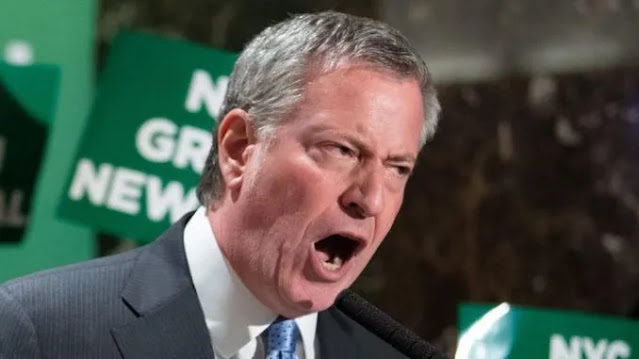 (Paranormal) New York City Mayor Bill de Blasio brazenly admitted on Friday that his plan is to enforce a socialist redistribution of wealth in the city.

During a presss conference, de Blasio began by voicing his support for the findings of a recent investigation that determined the NYPD “made a number of key errors that likely escalated tensions and a potential for violence” during the protests following the death of George Floyd.

He vowed that the NYPD would be reformed beyond recognition under his leadership.

“The COVID era has taught us that so clearly, and we need to do better and we will,” de Blasio said.

“And that means a commitment to fighting disparities and inequality in every part of the life of New York City and that certainly takes us to education where if you’re talking about the problems of disparity, if you’re talking about structural racism, certainly policing is not the only area to talk about. There are many areas to talk about and education must be front and center.”

“There has been so much that needed to be addressed in education in New York City, and from the beginning, what I tried to focus on was a very simple concept: equity and excellence,” he continued.

“That we needed to profoundly change the distribution of resources.”

De Blasio then emphasized, “I like to say very bluntly, our mission is to redistribute wealth.”

He admitted, “A lot of people bristle at that phrase, that is, in fact, the phrase we need to use.”

Theblaze.com reports: De Blasio has used such phrasing before, even just recently.

In August, the New York Post reported that de Blasio “made a public plea” for “taxing the rich and redistributing their money even as the Big Apple reels from a coronavirus-induced budget crisis that’s already caused well-heeled New Yorkers to head for the hills.”

“Help me tax the wealthy. Help me redistribute wealth. Help me build affordable housing in white communities if you want desegregation,” the mayor told a caller on WNYC’s “The Brian Lehrer Show” during a discussion about schools.

“What changes things is redistribution of wealth,” he reiterated. “Tax the wealthy at a much higher level. I just feel like this is a lot of cocktail party comfort going on rather than people honestly dealing with this issue.”

But de Blasio’s insistence on further taxes on wealthy New Yorkers has received pushback even from fellow Democrat Gov. Andrew Cuomo, who has pleaded with high earners to stop fleeing the state in a mass exodus that began when the coronavirus and lockdowns hit.

Cuomo pointed out earlier this year that the wealthiest one percent of New Yorkers pay roughly half the taxes collected in the state.