Hunter Biden Text Message To Daughter: ‘Unlike Pop, I Won’t Make You Give Me Half Your Salary’ 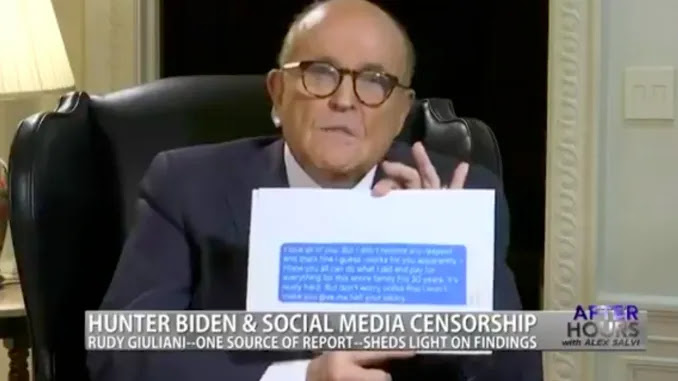 In what type of family does a father demand half of his son’s earnings?

Rudy Giuliani and Steve Bannon, via The New York Post delivered an October surprise on Wednesday when they began to drip feed explosive Hunter Biden emails, with the promise of much more to come.

The New York Post reported Wednesday that a laptop abandoned at a Delaware computer repair shop contained emails between Hunter Biden and various foreign actors offering millions of dollars to have access to his VP father Joe.

GWP report: The recovered hard drive also contained photos of Hunter Biden with a crackpipe in his mouth and a “raunchy” 12-minute video of Hunter partying with prostitutes.

It sounds like Joe Biden takes half of what Hunter Biden gets paid from Ukraine, China, Russia, Romania and other countries.

Joe Biden also gets 50% of what his slimy grifter brother makes.

How else would Joe Biden be able to live such an opulent lifestyle?

Hunter’s text to Naomi: “But I don’t receive any respect and that’s fine I guess. Works for you, apparently. I hope you all can do what I did and pay for everything for this entire family for 30 years. It’s really hard, but don’t worry, unlike Pop (Joe Biden) I won’t make you give me half your salary.”

.@RudyGiuliani should be the Attorney General

The photo below is a screenshot of a text message from Hunter Biden to his daughter, Naomi Biden, on January 3, 2019.

This describes the amount kicked back to the Boss, Joe Biden, as happens in every organized crime group.