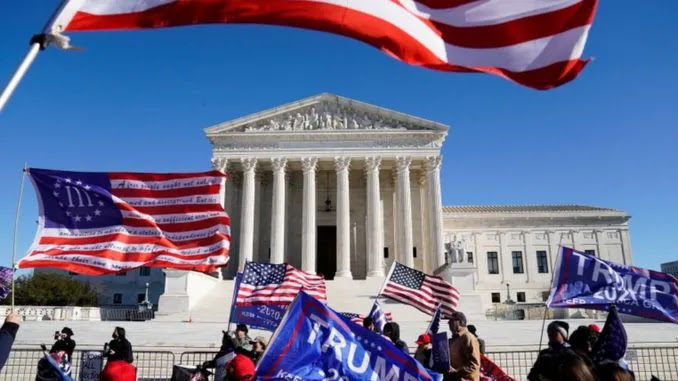 States that have joined Texas’ Lawsuit filed with the Supreme Court:

Seventeen states filed a brief in the Supreme Court just now in support of Texas' request that the justices throw out the results of the presidential election in four other states that didn't support President Trump. pic.twitter.com/1sldfhrkbl

Texas filed the lawsuit on Monday, arguing that the key battleground states “violated the Electors Clause of the Constitution because they made changes to voting rules and procedures through the courts or through executive actions, but not through the state legislatures.”

Breitbart.com reports: The lawsuit states that “certain officials in the Defendant States presented the pandemic as the justification for ignoring state laws regarding absentee and mail-in voting” and claims that the states “flooded their citizenry with tens of millions of ballot applications and ballots in derogation of statutory controls as to how they are lawfully received, evaluated, and counted.”

Calling the acts unconstitutional, the suit claims that the actions “had the same uniform effect—they made the 2020 election less secure in the Defendant States.”

“Those changes are inconsistent with relevant state laws and were made by non-legislative entities, without any consent by the state legislatures. The acts of these officials thus directly violated the Constitution,” the lawsuit, filed by Texas Attorney General Ken Paxton (R), says:

This case presents a question of law: Did the Defendant States violate the Electors Clause by taking non-legislative actions to change the election rules that would govern the appointment of presidential electors? These non-legislative changes to the Defendant States’ election laws facilitated the casting and counting of ballots in violation of state law, which, in turn, violated the Electors Clause of Article II, Section 1, Clause 2 of the U.S. Constitution. By these unlawful acts, the Defendant States have not only tainted the integrity of their own citizens’ vote, but their actions have also debased the votes of citizens in Plaintiff State and other States that remained loyal to the Constitution.

The Supreme Court has ordered the defendant states to respond to the lawsuit by Thursday.

“Response to the motion for leave to file a bill of complaint and to the motion for a preliminary injunction and temporary restraining order or, alternatively, for stay and administrative stay requested, due Thursday, December 10, by 3 pm,” the court wrote.

The State of Georgia has since fired back at the legal challenge, with a spokesperson for the Office of the Attorney General in Georgia telling Breitbart News that Paxton’s argument is “constitutionally, legally and factually wrong about Georgia.”

On Wednesday, President Trump referred to the Texas case as “the big one”:

We will be INTERVENING in the Texas (plus many other states) case. This is the big one. Our Country needs a victory!

We will soon be learning about the word “courage”, and saving our Country. I received hundreds of thousands of legal votes more, in all of the Swing States, than did my opponent. ALL Data taken after the vote says that it was impossible for me to lose, unless FIXED!

“No candidate has ever won both Florida and Ohio and lost. I won them both, by a lot!” Trump added, using the hashtag, #SupremeCourt:

No candidate has ever won both Florida and Ohio and lost. I won them both, by a lot! #SupremeCourt