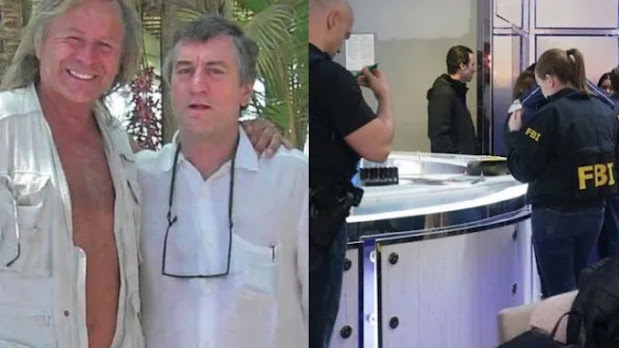 Manitoba RCMP said federal RCMP officers, along with members of the Winnipeg Police Service, arrested the ‘Canadian Epstein’ on Monday.

The arrest followed a demand from the US Justice Department to begin extradition “proceedings against Nygard in order to face charges in the United States as part of an ongoing investigation by the Federal Bureau of Investigation (FBI) and New York Police Department (NYPD).”

Globalnews.ca reports: He has also been accused of one count of racketeering conspiracy, meaning it’s alleged he and others used his company to benefit illegally and repeatedly, generally involving extortion or coercion.

“Nygard, and others … used force, fraud and coercion to cause women to engage in commercial sex with Nygard and others, and to remain with Nygard against their will.”

Nygard used company funds to “intimidate, threaten and corruptly persuade individuals who alleged that Nygard was engaged in sexual assault and sex trafficking … including by paying witnesses for false statements.”

Nygard, 79, made a court appearance in Winnipeg Tuesday to respond to the extradition process. His lawyer, Jay Prober, tried to have the details of the case subject to a publication ban, but that was denied by Justice Sheldon Lanchbery.

His next appearance will be on Jan. 13, but Prober said they hope to make a bail application before then.

Nygard denies all the allegations and “expects to be vindicated in court,” Prober added.

Nygard, who hails from Manitoba, has been repeatedly accused of sexual assault and sex trafficking over the past year.

In a lawsuit filed in a New York court in August, two of Nygard’s sons accused their father of ordering his girlfriend, who the suit claims is a “known sex worker” to rape them when they were teenagers.

In the latest court complaint, his sons claim Nygard instructed the same alleged sex worker — who was a long-time girlfriend of Nygard’s — to “statutorily rape” them, 14 years apart.

The two complainants, both Nygard’s biological children, are identified as John Doe number one and number two in the court documents obtained by Global News.

One of Nygard’s sons – who is not involved in the above lawsuit – said he is relieved to see his father behind bars.

Nygard’s eldest son Kai said he first heard the news early Tuesday morning and was overcome by a sense of relief knowing that his father could soon be extradited to the United States.

“We were elated with the news,” he said.

Kai last spoke to his dad two days ago — and said the past year has been difficult as he tries to reconcile the allegations with the person he knew growing up.

“This isn’t the father I thought I knew,” he said. “Who is this monster?

The 38-year-old said while he is not here to condemn his father or say whether he’s guilty or innocent, he does feel that the women who have accused Nygard of serious sexual crimes deserve to have the case heard in court.

Read the complaint by his sons.

In February, a lawsuit was filed against Nygard and included allegations from 10 women accusing him of enticing them to his estate in the Bahamas.

By June, a total of 57 women had joined the class action lawsuit, which accuses him of rape, sexual assault and human trafficking. Eighteen of those women are Canadian.

“We’ve waited so long for this day to come, so long for Peter Nygard to be held criminally accountable for his crimes and that day is here,” said Lisa Haber, one of the lawyers involved in the class-action lawsuit.

“I’ve had four people call me today,” he said.

“We’re going to have more and more as more people feel empowered to tell their truth.”

Nygard has denied all allegations and blames a conspiracy caused by a feud with his billionaire neighbour in the Bahamas.

Four women claim they were either raped or sexually assaulted in Winnipeg. At least two of the women are from Winnipeg.

A woman listed as Jane Doe No. 15 says she was flown to the Nygard Companies’ Winnipeg property under the guise of a modeling job where she was “held captive against her will for three days and raped repeatedly by Nygard.”

Jane Doe No. 27 says she met Nygard at the Nygard Companies’ Winnipeg office seeking a modelling sponsorship. She says during her meeting, Nygard complemented her and then groped her breasts.

Jane Doe No. 37 says her father sold Nygard furs through his business so she knew Nygard and frequently saw him at the store. She says that when she was 15, Nygard raped her in the bathroom at a Winnipeg restaurant.

Jane Doe No. 44 was 14 and in the child welfare system when she says Nygard picked her up on the street in Winnipeg and paid her for oral sex. She claims this happened on multiple occasions.

Twelve of the victims were under 18 when the alleged crimes happened.

That suit was put on pause in the summer by a judge in the U.S. District Court for the Southern District of New York.

Reasons for the stay in the suit were sealed, however, the court docket at the time said the stay resulted from a government motion that named three federal prosecutors.

The Department of Justice and the U.S. Attorney’s Office for the Southern District of New York did not respond to a request for comment at the time.

Nygard resigned as chairman of Nygard International in February this year following an FBI raid of the company’s New York City headquarters amid the allegations of sexual assault and sex trafficking.

1 Anonymously • 13:38, 16.12.2020
Pedofilas Peter Nygard, Kanados Epšteinas, areštuotas už prekybą vaikais
TAIP PAT SKAITYKITE:
02.03.2021 laikas 20:37 It begins: Employer – ‘If you’re not vaccinated, you’re not working here.’ Welcome to the future of America?
Many citizens in the United States are facing the possibility of mandatory COVID-19 vaccinations, implemented by employers, cities, states, or even through federally-related regulations.