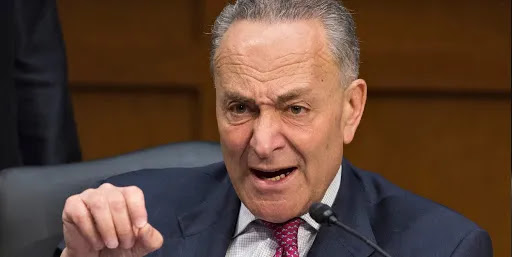 Schumer said on Monday that Senate hearings on the cabinet nominees should begin immediately after the Georgia run-off elections on January 5, allowing for confirmations to be completed on Biden’s January 20 inauguration day and soon thereafter.

RT reports: He argued that Senate committees began hearings on cabinet nominees for past presidents-elect, including Barack Obama and Donald Trump, in early January, and the Covid-19 pandemic adds to the urgency to help Biden’s administration hit the ground running.

"In the midst of this once-in-a-century crisis, it's imperative the next administration can count on the Senate to confirm its cabinet without delay" pic.twitter.com/ZcFJXbwKSa

“In the midst of this once-in-a-century crisis, it’s imperative the next administration can count on the Senate to confirm its cabinet without delay,” Schumer said.

However, he overlooked the fact that this year’s presidential election is still unsettled, with Trump mounting legal challenges to Biden’s media-declared victory based on allegations of fraud.

The senator said Trump’s early nominees were either unqualified, plagued by ethical complaints and conflicts of interest – or all three. “At the time, Republicans in the Senate lined up to confirm President Trump’s appointments, arguing that a president deserves his cabinet and broad deference on his nominees,” Schumer said. “I would hope the same deference will be extended to President-elect Biden’s nominees, especially considering the obvious gulf in quality, experience, ethics.”

The Senate confirmed just two of Trump’s cabinet secretaries on inauguration day 2017, compared with six for Obama in 2009 and seven for George W. Bush in 2001. Three weeks after taking office, only half of Trump’s 14 cabinet picks had been confirmed. Obama had 12 confirmations at that point, while Bush had all 14.

Congress was evenly divided when Bush took office, so his vice president became the tie-breaking vote on January 20. Democrats controlled the Senate in 2009, including in the weeks prior to Obama’s inauguration.