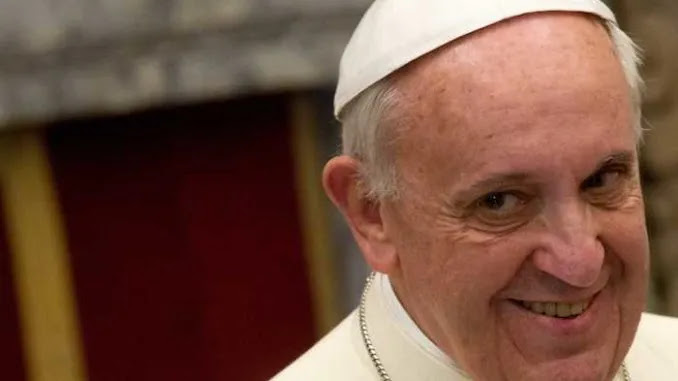 Pope Francis has adopted Joe Biden’s slogan “build back better” to describe his creepy vision for the great reset after the coronavirus pandemic subsides, saying he finds the expression “quite striking.”

“The theme of this year’s celebration is ‘Building Back Better: Toward a Disability-inclusive, Accessible and Sustainable post-COVID-19 World,” the pope wrote in his message for the International Day of Persons with Disabilities, while adding, “I find the expression ‘building back better’ quite striking.”

To help our society to “build back better”, inclusion of the vulnerable must also entail efforts to promote their active participation. #IDPD https://t.co/JIIJgNx76E

On his official website, Biden explains the message behind “build back better” by insisting that “this is no time to just build back to the way things were before, with the old economy’s structural weaknesses and inequalities still in place. This is the moment to imagine and build a new American economy for our families and the next generation.”

“We will be able to regenerate society and not return to so-called ‘normality,’ which is an ailing normality, indeed which was ailing before the pandemic: the pandemic highlighted it!,” he said, adding that the old normality “was sick with injustice, inequality and environmental degradation.”

In his recent op-ed for the New York Times, the pope wrote that this “is a moment to dream big, to rethink our priorities — what we value, what we want, what we seek — and to commit to act in our daily life on what we have dreamed of.”

“God asks us to dare to create something new,” he declared. “We cannot return to the false securities of the political and economic systems we had before the crisis. We need economies that give to all access to the fruits of creation, to the basic needs of life: to land, lodging and labor.”

“We need to slow down, take stock and design better ways of living together on this earth,” he proposed.

The WEF at Davos welcomed what it sees as the pontiff’s endorsement of its “Great Reset” program, highlighting the similarities between their visions.

Moreover, the pope “blames the ‘dogma’ of neoliberal economics for making us more vulnerable to COVID-19,” it states, while calling for “greater multilateral cooperation and a focus on human dignity.”

“Neoliberalism’s free-market orthodoxy has been blamed for making health care systems and livelihoods especially vulnerable to the pandemic, and has drawn a clearer line under the need for active government intervention,” the article asserts.