‘Not Much To See’: Reporter Stunned At Lack of Crowd For Biden Campaign Event in Arizona 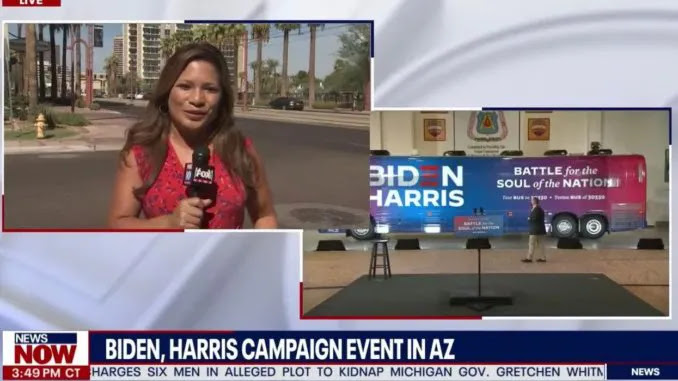 Democrat presidential nominee Joe Biden and his running mate Kamala Harris kicked off their campaign “Bus Tour” in battleground state Arizona on Saturday, but the event appeared to be deserted.

Local news station KSAZ-TV reported on the Biden/Harris “rally“ — with reporter Nicole Garcia expressing her amazement that not a single Biden supporter could be seen showing up to the event.

“There’s really not much to see…it’s kind of boring out here…so it’s not your typical presidential campaign event,” KSAZ-TV reporter Nicole Garcia said from outside the venue.

“We don’t see people rallying outside, we don’t see signs or really much of what’s going on.”

Garcia contacted the Democrats about the lack of fanfare and supporters at the Biden event.

Biden’s campaign reportedly claimed they were intentionally trying to keep numbers low at the event due to COVID-19.

“I’m told by one of the Biden staffers, local staffers, is that they kinda kept the details about the visit as far as the timing and exact locations,” Garcia said.

“They didn’t really want to give that out to the public, because they want to keep the crowds to a minimum,” she added.

The reporter added that the only people she saw heading into the event were the media press pool and Biden campaign staffers.

“Not a lot of fanfare out here,” Garcia reported.

“There’s really not much to see.

“I’ll step out of the way, but it’s kinda boring out here.

“So, it’s not your typical presidential campaign event; we don’t see people rallying outside, we don’t see signs or really much of what’s going on.”

During Garcia’s report, her cameraman panned behind her, showing not a soul in sight other than a lone police car.