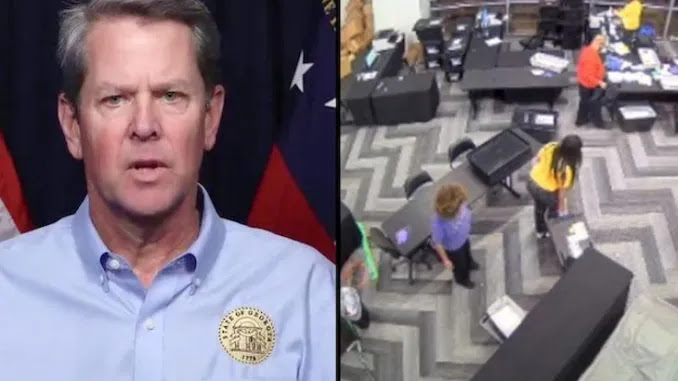 Georgia Governor Brian Kemp has demanded a signature audit of ballots following claims of a ballot-stuffing operation in Fulton County on election night.

This is a total game changer! Sure looks like ballot stuffing in GA! All caught on camera. Busted! @realDonaldTrump @JennaEllisEsq @RudyGiuliani #stopthesteal pic.twitter.com/FQM6eQvMfq

“Obviously, the Secretary of State, per the laws and the Constitution, would have to order that. He has not done that. I think it should be done,” he added.

The governor told Ingraham that he supports the President Trumps legal efforts in exposing fraud in the state.

“Especially with what we saw today, it raises more questions. There needs to be more transparency on that,” Kemp declared.

“I think in the next 24 hours hopefully we’ll see a lot more from the hearings that the legislature had today and we’ll be able to look and see what the next steps are,” he added.

Amgreatness.com reports: David Shafer, the Chairman of the Georgia Republican Party, said the party has supported the governor in his “repeated calls for an audit of the absentee signature verification process.”

We have supported Governor @BrianKempGA in his repeated calls for an audit of the absentee signature verification process. https://t.co/mwLquKegy7

The governor told Ingraham that he’d heard that there was a monitor present during the late night counting, but said it was incumbent upon Raffensperger to come out and explain exactly what was going on in that video.

The video does not show any monitors in the roped off section of the room after the room had been cleared.

Kemp also addressed calls from some Republicans to boycott the upcoming Senate run-off in Georgia because of the state’s botched handling of the 2020 election.

In person early voting begins on December 14 and Election Day is January 5.

Georgia is still recounting votes in Fulton County for the 2020 election.