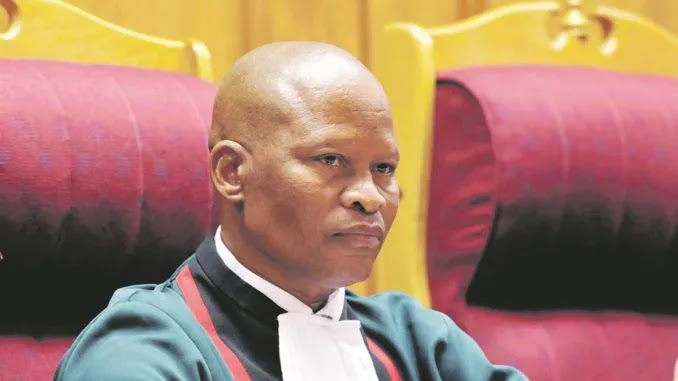 (Paranormal) South Africa’s chief justice Mogoeng Mogoeng has rejected concerns that he could be endangering people’s health by linking coronavirus vaccines to a “satanic agenda”.

The senior judge said people should be spared any vaccine that sought to “advance a satanic agenda of the mark of the beast”.

Mogoeng claims he is not against vaccinations, but is against those that may ‘corrupt’ DNA and has called on God to destroy it.

Worries have quickly surfaced that people might avoid vaccination as a result of Mogoeng’s comments.

Two decades ago, the then-president Thabo Mbeki questioned whether HIV caused Aids, which has ravaged the country.

Mogoeng, who frequently displays his Christian faith while performing his duties, prayed at a public event on Thursday that people should be spared any vaccine that sought to “advance a satanic agenda of the mark of the beast”.

Addressing questions about this at a news conference on Friday to release a judiciary report, he said: “If there is any vaccine that is deliberately intended to do harm to people, that vaccine must never see the light of day. I cry unto God to stop it.”

Mogoeng added: “I don’t think the vaccine must ever be compulsory … You can’t impose a vaccine on people. Why should you?”

The Sunday Times Daily news site quoted Barry Schoub, a virology professor at Wits University and head of a ministerial advisory committee on Covid-19, as saying: “It is unfortunate that someone of that stature is misleading people because vaccines are such a major part of controlling this epidemic and it is unfortunate that someone with such influence is opposing efforts to control it.”

But Mogoeng said he would not be silenced: “I don’t care about the consequences. We’ve been quiet for far too long, toeing the line.”

1 Anonymously • 09:41, 25.12.2020
Pietų Afrikos vyriausiasis teisėjas Mogoeng Mogoeng atmetė susirūpinimą, kad jis gali pakenkti žmonių sveikatai, susiedamas koronaviruso vakcinas su „šėtoniška darbotvarke“.
TAIP PAT SKAITYKITE:
22.01.2021 laikas 09:58 The most important legal pathway that would allow Trump to reclaim the Presidency
If the 45th President of the United States is serious about addressing the 2020 election fraud that deprived him of another four years of service to the republic of the United States, then his legal team should begin to pursue a new legal strategy using a writ of quo warranto....